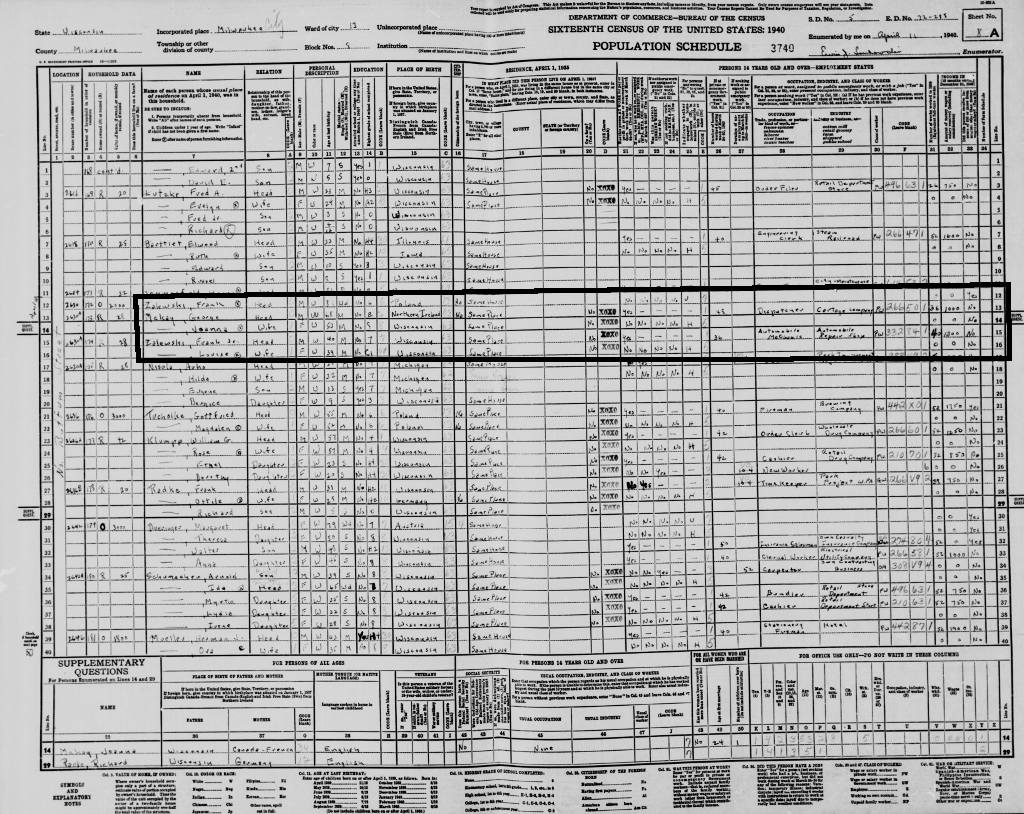 Unlike previous census years, images of the the 1940 US Census will be made available as free digital images on Day 1. While this is awesome, only the images are being released. The job of indexing these census records so they can be easily searched relies on us. Wonder how you can help or have more questions about the census? Visit the 1940 US Census Community Project website.

I’m not expecting to find any amazing, new information in this census since all 4 of my grandparents were in the 1930 Census. Though, there will be a few things that may be interesting. It’s the first census after my great-great grandmother passed away in 1939. There is also supposed to be some new questions for random individuals that may give us more info than normal. Hopefully, I have a few family members that answered those.

I wrote this for another site, so it may have more general genealogy info than I would have written if it was on this blog. But, you already know about all of this stuff.

As you know from other posts and podcasts, I do enjoy genealogy and the research that goes into unraveling my family tree. Last year, I came across a show on BBC Television in the UK called Who Do You Think You Are? I was able to watch most of the last (seventh) season and scattered other episodes from different seasons in the English and Australian versions via YouTube and other methods. (Since it’s only on British television and the DVDs are only Europe and UK region-coded, so I can’t watch them easily.) I have yet to watch an episode didn’t completely captivate me. Maybe it’s my love of Genealogy, or my love of hunting down a mystery, but the show grew on me.

END_OF_DOCUMENT_TOKEN_TO_BE_REPLACED

After going out to dinner for our birthday (my wife & I) with my parents last night, we got to talking a bit about genealogy and some stories about my grandparents. It was mentioned that my maternal grandfather was in World War II. I was never sure on this subject since I’ve heard nothing about. I’m told that he doesn’t talk about it for reasons unknown to my parents. He’s never even mentioned it to my mother. I completely respect his decision. Who knows what he may have experienced in Europe in the 1940s.

I’m aware of all of the documents available for World War II either at Ancestry or Footnote, so I thought I’d look around. I have yet to find any mention of my grandfather in any documentation available. This doesn’t mean it doesn’t exist. I saw it mentioned that some documents have yet to be released due to privacy. My mom and dad mentioned that they think he was a Sergeant since my grandmother sometimes calls him “Sarge.” Does anyone know of any other places to check?

My search for that information turned into finding a nice collection of newspaper articles on my maternal family line. I happened to find my grandfather in an article from the Sheboygan Press in 1941 mentioning that he came in 3rd place in some sort of kite contest. I also found their wedding announcement, a mention of a speeding ticket he got in 1968 and a bunch of other neat articles. I also found some other obituaries and wedding announcements. Don’t underestimate the information in some of these old newspapers. Ancestry has a lot of newspapers on file that are mostly searchable. Footnote doesn’t have a lot yet, but knowing them they’ll be getting a lot more and I like their system a bit better.

Here are some examples of what I found:

Just find a local paper on one of these sites, if there is one available, and just browse around by searching for last names. You’ll find some cool stuff.

Remains of four people that were found about a decade ago in my home town, while adding on to a local church, were finally laid to rest this week. According to the news article about this, they are believed to be over 100 years old. Over the last decade, they’ve been trying to figure out who these remains belonged to, even going as far as contacting a forensic pathologist to conduct a bone analysis. All he could say was the they were probably of European descent.

Eisenberg told the crowd gathered Tuesday that it’s not even clear whether all four were originally buried together. What’s known is that one of the four was a male and another was a female. The child was buried with one of the adults – whose gender couldn’t be determined – in a brick crypt.

Unfortunately, they couldn’t find out who these remains belonged to, but it’s good to see them finally laid to rest again.

Read one of the articles here at JSOnline.com.

There are some interesting articles over at the National Geographic’s Genographic news site.

I find the Genographic study very interesting. It’s sort of the genealogy of everyone; a very broad view, if you want.

I ran across this via Lifehacker. It looks to be a website that allows you to create a “family website” including family trees, photos, calendar, and maps. It’s called JotSpot Family Site.

Use our quick family tree builder to see all the family generations at a glance. Never forget the names of your cousins’ children again.

It looks like a neat site. The design is very clean and easy-to-use. I have not signed up for a site, since..obviously..I already have a site. But, for the novice family researcher, this may be a great way to get everyone involved and up-to-date. If any of you start a seperate Zalewski site, let me know and I’ll link to it.

Speaking of Zalewski’s, there haven’t been any signups to the Zalewski Surname Study. If you’re a Zalewski, please read all about it. This could help many family’s research into the Zalewski surname origins.

It’s about time something like this happened. The world needs less of these jerks. I remember when I was a kid, we used to sled down a hill in our local cemetery. It had no headstones on it, it was an empty hill. But, there were always knocked down headstones and stories about kids who used to do it. I really don’t see the fun in it. Turns out, neither does this kid…
Police: Vandal Trapped By Tombstone

Authorities said it took four firefighters to lift a 600-pound gravestone off the 16-year-old boy’s leg early Tuesday after he helped knock over that headstone and dozens others.

Though, it does make me smile a little bit.