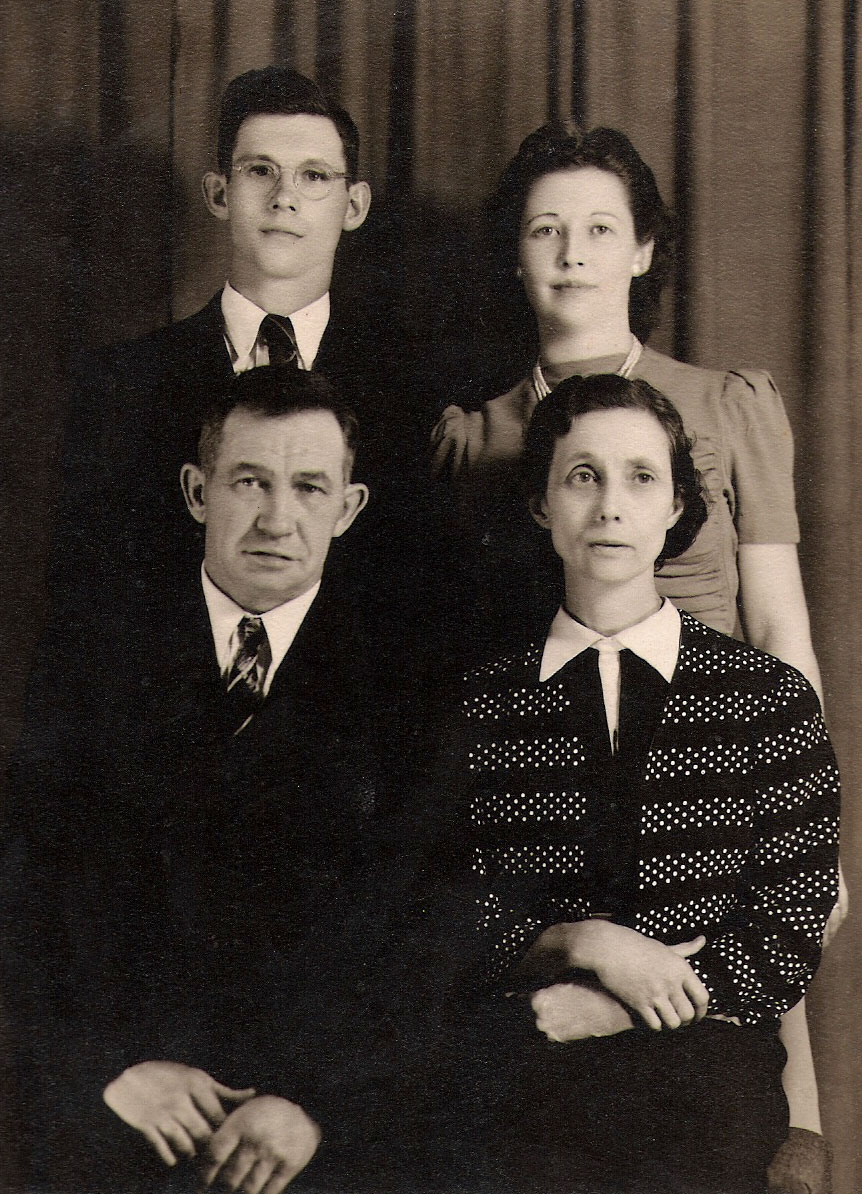 I mentioned in a recent post that I was able to get 23andMe tests for my father and my father-in-law that would hopefully help narrow down DNA matches and also find out more about ourselves. Those tests have been taken, sent in, and now finally analyzed. There were no surprising results, but it does help make a clearer picture of certain things.

With my father’s tests, I was also able to get his mtDNA (or Maternal) Line passed down from his mother’s line. The surnames that it follows would be CORRIGAN > BRAATZ > STEARNS > SCHUMACHER > HEINZ > HETTLER and that’s as far as I have right now. It’s basically a deep German line (minus the obvious Irish one in the beginning.) His mtDNA haplogroup is U4, but the subgroup is U4a3. 23andMe says:

Haplogroup U4 is found in western Eurasia, from Mongolia to central Europe. It arose about 25,000 years ago and subsequently spread with the migrations that followed the end of the Ice Age about 14,000 years ago.

[U4a] diverged from its U4 sister lineages about 21,000 years ago in the region surrounding the Baltic Sea. Today it is most common among the people of the Volga River and Ural Mountains of Russia, such as the Chuvash, Kets and Mari. It is also common among the Baltic and Finnish people of northern Europe who speak languages related to the Finno-Ugric tongues of the Volga-Ural region in western Russia.

That didn’t really surprise me. As for the YDNA line, which I also share, what is interesting is that my haplogroup is R1a1a* which usually means they know you’re R1a1a, but more than likely part of a subgroup. My father’s YDNA haplogroup is found to be just R1a1a, technically putting us in separate groups on the site. More than likely their tests are now more accurate and figured out that we’re directly from the R1a1a haplogroup.

My father-in-law’s tests were doubly useful as both the YDNA and mtDNA info was new to us as my wife doesn’t get either of those passed down from him. His mtDNA line, which follows the surnames: COLLINS > HUIZEL > REINDL > BOHM. The research on this line ends in the South Bohemian section the Czech Republic, which I assume was Czechoslovakia at the time. His mtDNA haplogroup is found to be H5.

H5 appears to have originated during the Ice Age, as the human population of Europe retreated to the few relatively mild pockets of the otherwise frozen continent. The haplogroup appears to have sprung up somewhere near the Caucasus Mountains, or in forests near the Black Sea. H5 is particularly common today in Georgia and in other populations from the Caucasus region. Not long after it originated, a few migrants carried H5 along the southern fringes of Europe into the Balkans and as far west as France, where the haplogroup can still be found today.

It seems to line up with the little amount of data we have on that line. His YDNA line, which we assumed was pretty deep Irish as the surname is MORAN, was pretty close to our assumptions. The YDNA haplogroup was found to be (besides the longest one ever) R1b1b2a1a2f*. There is that little asterisk again.

Besides matching our assumptions, that is a cool fact about men from that haplogroup. It’s the first haplogroup I’ve dealt with that names an actual (possible) ancestor. It also gives a highly-probable area of where to look for the origin of his MORAN ancestors.

Outside of the haplogroup testing, we’re still using this new info to break down DNA matches. Having at least one parent allows you to know which side a match comes from, narrowing down the research. I’m still working on that. The tests also gave us some interesting data on our Ancestry Composition which I will post about soon.

Anyone test their parents or other close relations and get some useful information? This is a photo of my wife’s great-great-grandparents, Charles & Emma (DIETER) MORAN, and three of their children. The child on the left is her great-grandfather, Fred MORAN, born in 1891. Basing the date off of the children, this photo was probably taken in about 1900. The other two children are probably the twins, Alma & Allan. Charles was one of the first Moran children of Robert & Dorothea (COOK) MORAN to be born in Wisconsin. The rest were born in Quebec, Canada as Robert & Dorothea must have immigrated there from Ireland and later married. There were a lot of Irish immigrants in that specific area of Quebec. My wife lost her paternal grandmother early this morning. She wasn’t doing too well for the past few weeks, so she is now free from that pain. I’m sad that my daughter was not able to meet her great-grandmother, but great-grandma was able to see a photo of Aerissa. Plans are still up in the air, but we may be making a cross-state drive sometime in the near future for the funeral, which may be interesting with a 2-month-old baby.

This is a photo of my wife’s great-grandparents, Fred & Norma (POWELL) MORAN and their children, Keith (her grandfather) and Vivian. The Moran men, at least for a few generations, seemed to be easily recognized by their one physical attribute, their ears. It doesn’t seem to have been passed down much further.

This week I decided to do a Surname Saturday on one of my wife’s surnames, Moran.

The MORAN surname first shows up in her tree with Robert MORAN who was born in Ireland in 1820. We’re not exactly sure where in Ireland. Tracing this name into Ireland is like tracing the JOHNSON surname in America we’re told, it’s very common. I have that problem in my tree with the surname THOMPSON into the UK somewhere.

It looks like Robert first came through Canada (as did my Irish ancestors) and then made it to southwestern Wisconsin. It seems like he immigrated with his wife, Dorothea COOK, who was born in County Cork, Ireland (which may point at Robert’s origin, too.) There is no hard evidence of this information besides some online trees and family information, but it’s something to start with.

Dorothea died in 1872 and Robert re-married to Margaret ENYARD. It says Robert died on 16 Jun 1897 in Tarver, Wisconsin but I can’t find a Tarver in Wisconsin. I’m pretty sure he died somewhere in southwestern Wisconsin. It’s probably an old, unincorporated town. We have a lot of those.

She then descends from Robert and Dorothea’s son, Charles Christopher MORAN, who was born  23 Nov 1864 in Montfort, Grant Co., Wisconsin. Charles married a German, Emma Amelia DIETER in about 1889.

Her MORAN line continues down to her great-grandfather, Frederick H MORAN, who was born on 20 Feb 1891. He married Norma POWELL in 1915. After that it continues all the way down to my wife.

Wikipedia tells us about the MORAN surname [link]:

Moran (Irish: Ă“ MĂłrĂˇin) is a modern Irish surname and derived from membership of a medieval dynastic sept. The name means a descendent of MĂłrĂˇn, translated as Big One. Morans were a respected sept of the UĂ­ Fiachrach dynasty in the western counties of Mayo and Sligo. In Ireland, where the name descended from the Gaelic, it is generally pronounced (phonetically) “more-in”, an anglicized approximate of the Irish pronunciation. Elsewhere, pronunciation follows the French surname, Mo rant, anglicized to (phonetically) “more-anne”.

Surprisingly, the top countries with the Moran surname are Ireland (obviously) followed by Spain, Argentina, and Australia according to the World Names Profiler.

I’ve been doing a lot more research on the east coast states, mainly Virginia, Delaware (Hi, we’re in..Delaware), Maryland, etc and it’s not as easy as I had assumed it would be. I say this because I had assumed there were a lot more records since those states have been around the longest. I’ve been doing some more research for my fiancee’s tree (which will soon be merged with mine) and she has a lot of east coast ancestors. I have absolutely none, all of my ancestors either came straight to Wisconsin via foreign lands, or through Canada, eh? It’s very boring on this side, plus it’s not the easiet thing to find records for some of these other countries.

Does anyone have any tips on doing research (mainly online) for the east coast? I have yet to travel to our local Family History Center since it’s rarely open when I’m available. I do have nearly full-access to Ancestry.com.