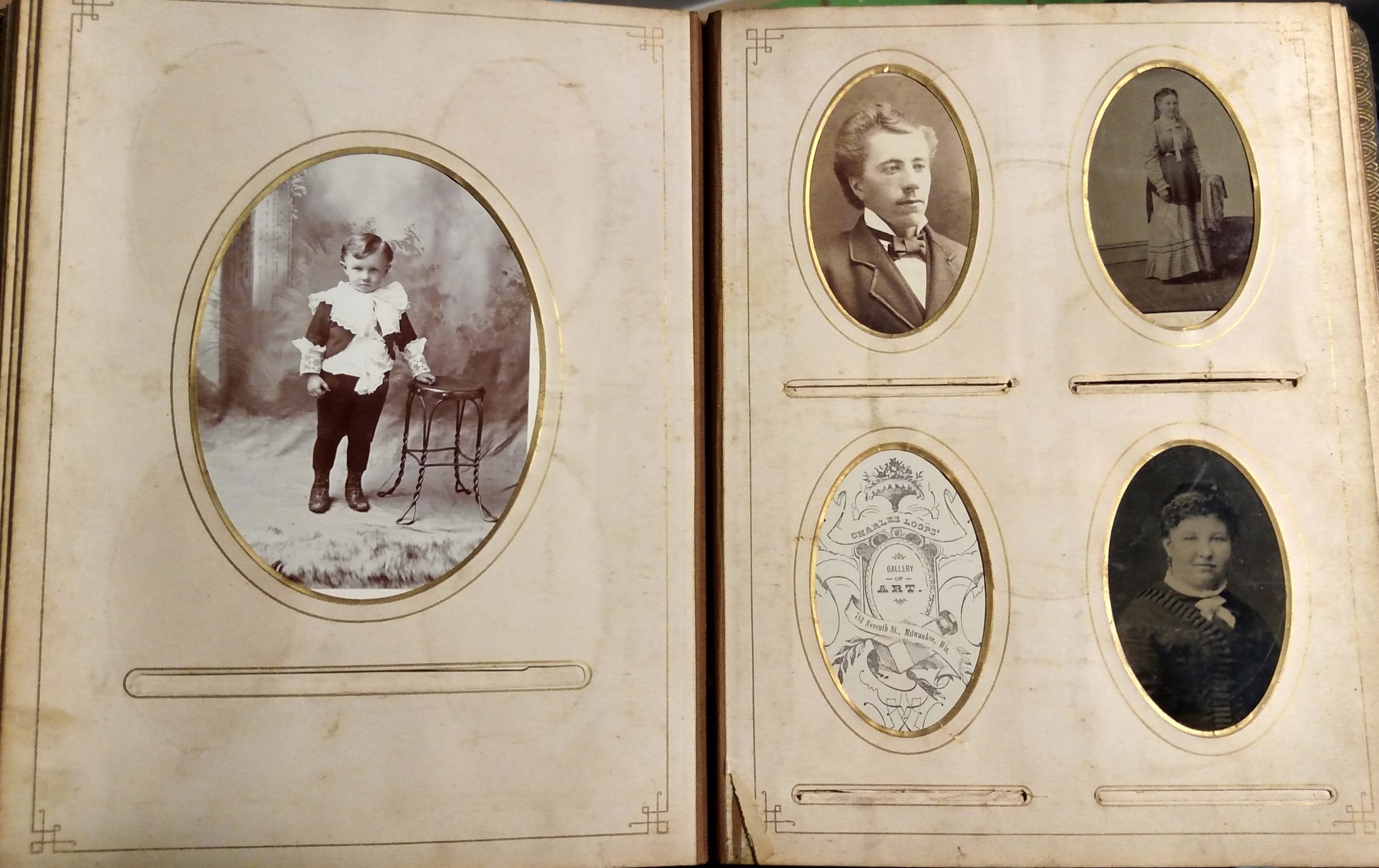 One of the things I received from my grandparent’s house within the last few years is an album full of very old, but unlabeled photos. While on one hand, it’s awesome. The photos are in great condition and there are dozens of them. On the other hand, I have no idea who these people are. Most people I could talk to about it are no longer with us. Fortunately, my grandfather’s older sister, my great aunt Eleanore, is still alive at 94. UPDATE (10/26/16): I did get to visit with my great aunt, though she has no idea who is in any of the photos. So, no luck there.

The album is in pretty good shape overall for being very old. Most of the photos are of the Cabinet Card variety, but there are a few Tintypes included. The Cabinet Cards are from photography studios mainly in Milwaukee, Wisconsin, but also from Connecticut and Port Washington in Wisconsin and as far away as Chemnitz and Rostock in Germany.

I’ve been able to scan all of the photos, back and front, so I shouldn’t need to keep moving them around. A lot of the pages are pretty fragile and some of the photo holders are ripping and breaking. There are both large and small photos.

I”m going to try my best to determine what I can about the photos. I hope to take you on the journey with me as I post my findings here. It may be as simple as visiting my great aunt and her telling me who everyone is (wouldn’t that be nice?) At the very least, I will get each of the photos posted online with as much info as I can. Maybe someone, somewhere will know more about it. 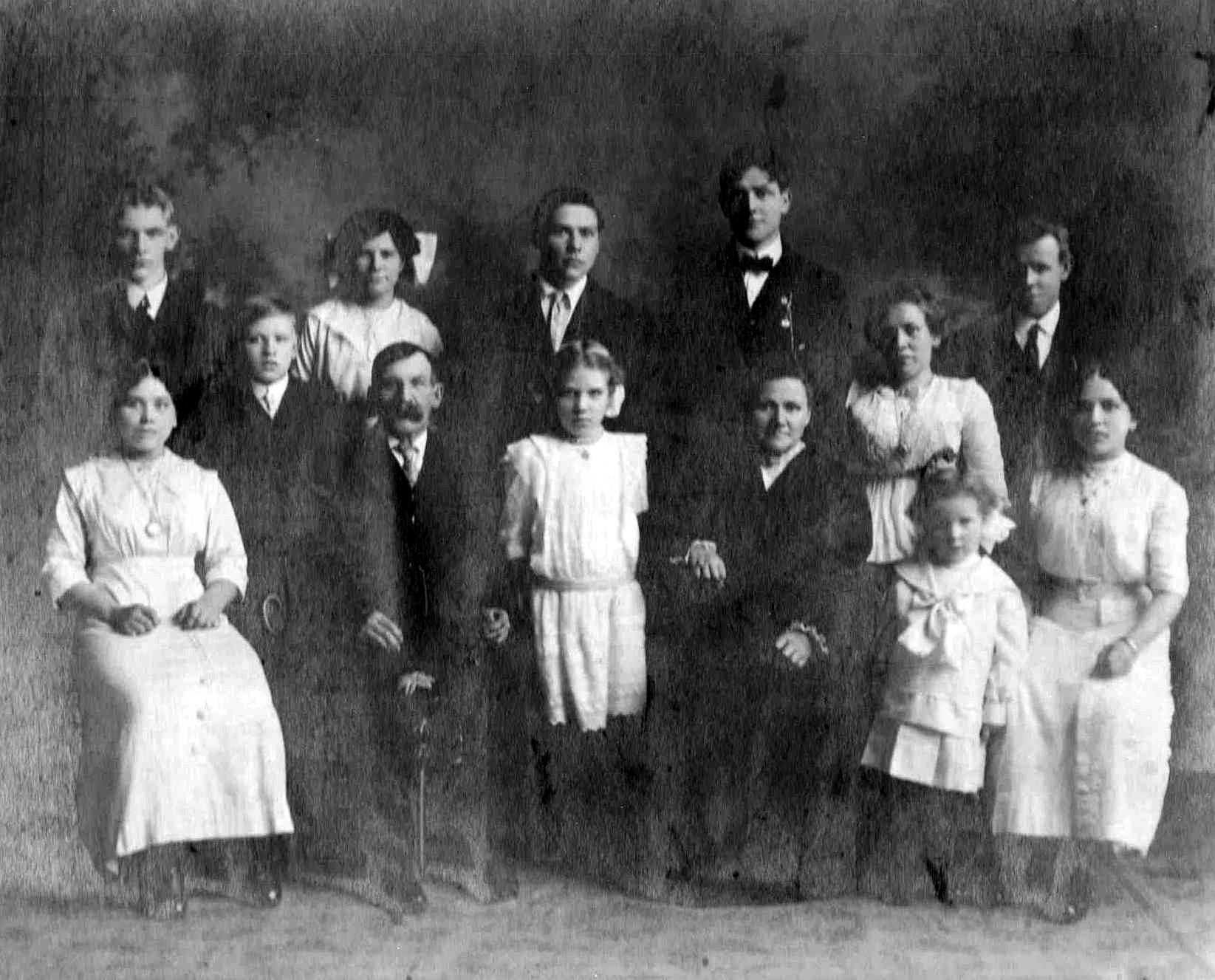 So, using the speed and power of the Internet, I come bearing updates. While I didn’t completely solve the original issue, I still don’t know who is in that photo, I did confirm that is it not the Charles & Augusta Last family. But, I also now have a copy of a family photo of the real Last family that I had originally hoped for.

As I said in the original post, I sent the photo off to a Facebook friend that I connected to via a 23andMe Relative Finder connection. She sent it to her mother and family and they also ruled out the photo due to the ages of the children, etc, but then they sent a scanned version of the Last family’s photo. See it here. It’s the best quality scan, mainly because they did it quickly for me. It also turns out that the original photo is in possession of someone in a town in the same county that I live, which I assumed since the family lived there. It also turns out that it’s at the same Senior Apartments that my grandparents are currently living. So, soon I hope to make a visit, bring my FlipPal over there, and get a nice scan for myself.

This family lines up much, much better with the kids.  I definitely see Augusta in this mother’s face. My great-grandmother, Madora, is obviously the one in the back with the big, white bow in her hair. Also, the twins are there on both sides of the front row. I do have to say that I think Charles looks much cooler in this one than the other one, I mean look at that massive mustache. Doing a bit of guessing based on ages, my guess is this photo was taken around 1912-1913.

As for the original photo, I still think it looks strikingly similar to Augusta. It is possible that it is her sister’s family. Or maybe it’s a completely different family. This is the life of a genealogist. 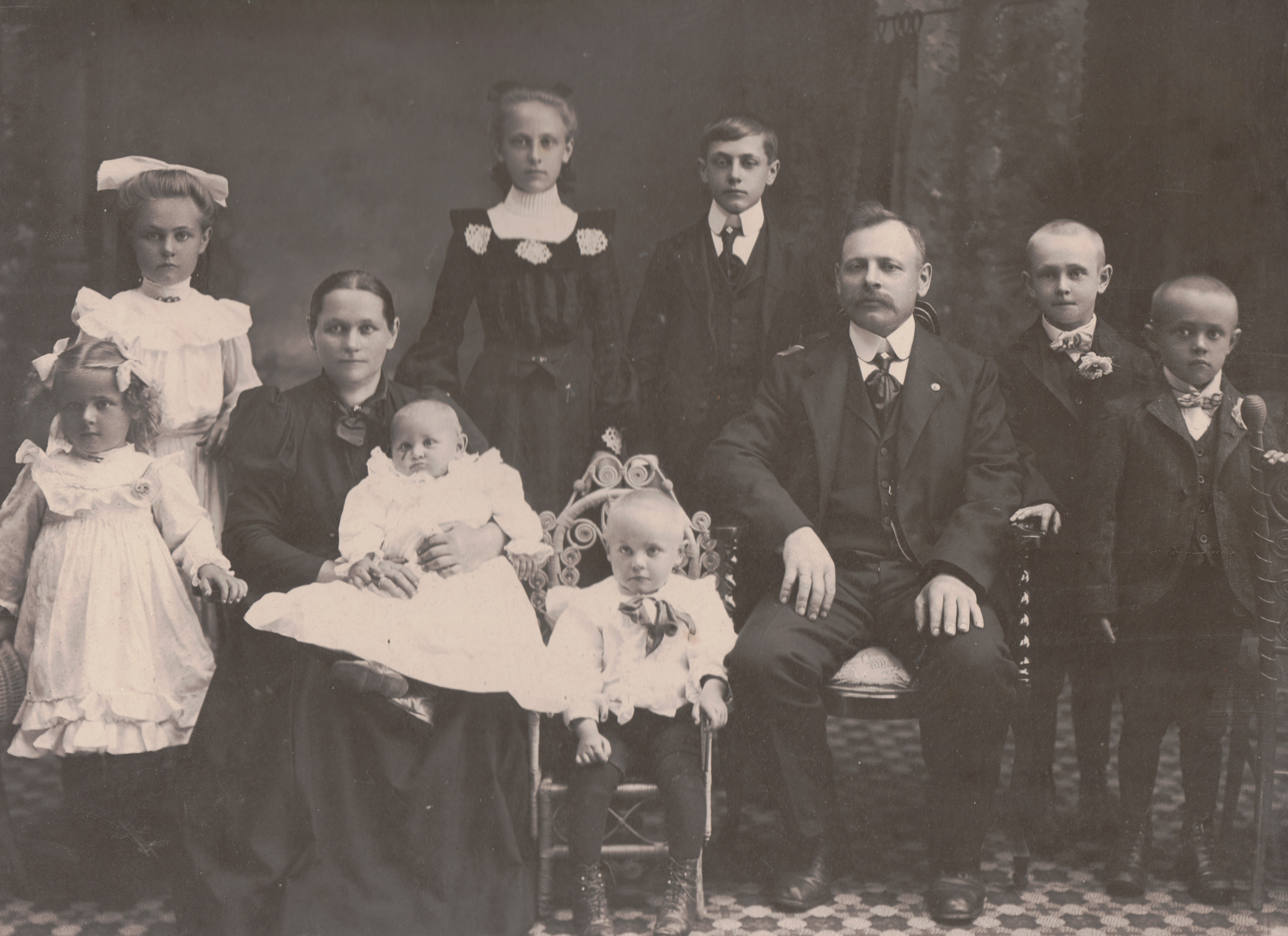 UPDATE: There is an update posted on this mystery photo.

We’ve been doing a bit of cleaning at my grandparent’s  house recently, which has caused us to come across a lot of new family photos from my maternal side. This comes as a double-edged sword as there are some amazing old photos, including a very old photo album filled with late 19th-century, early 20th-century photos, but most of them are not labeled. I hope to spend some time with my grandfather and run a few of them by him, but he may not remember anymore.

There was one neat, large family photo that we found. I had no idea who it was. Then, I noticed a few things on the mother in the photo. She looked strikingly similar to my great-great-grandmother, August (Luedtke) LAST. Though, I only have more recent photos of Augusta and she lived to be 100, so her age changed her appearance quite a lot (as it does to us all.) But, there were certain things about her face in both photos that matched up quite well. Here is a quick comparison image I put together. One of the few things I noticed was her mouth, how both of them are very straight across. Then, I noticed the nose. Both have a bit of a ball on the tip. The last thing I noticed were the ears. Augusta seemed to have ears that landed in the “larger” category and both women also have these. It’s tough to match the eyes as her age has caused some problems around that area, but they do look similar. Her forehead and hairline match up quite well. The only lingering issue is when I look through the list of children I have and try to match them up with the children in the photo. They don’t line up quite right.

Here is the complete family photo with the children listed below. I’ve tagged the children from oldest to youngest based only on how old they look in the photo. Click for larger version. I guess the moral of the story is to label your photos. I’ll keep you updated on anything more I figure out. I’ve already sent the photo to some descendants of Helena that I connected to via 23andMe to see if they notice any similarities.