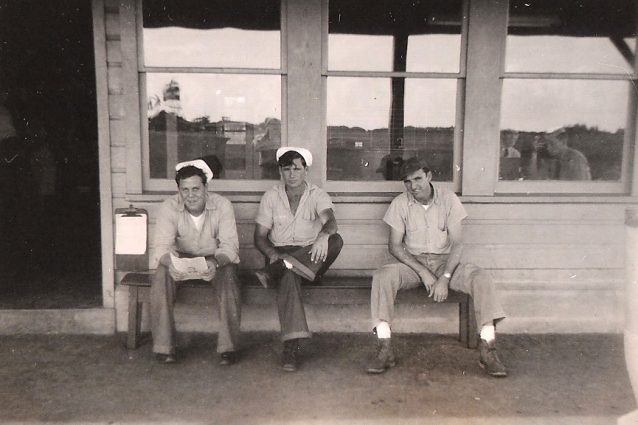 Ancestry just recently add a massive collection of U.S. Navy Muster Rolls from 1938-1949. My grandfather, Richard Zalewski, served with the Navy from about 1940 to 1946. Here is their description:

This database contains U.S. Navy muster rolls and associated reports of changes for U.S. Navy enlisted personnel who served on U.S. Navy ships or in other naval activities between 31 January 1938 and 31 December 1949. Over 33 million records are contained in this database.

I ran a search on my grandfather and found many records. Most of them don’t contain any surprising information, but they can be used to track his movement through the Navy during WWII.

He is first found on 31 Jan 1941 at the U.S.S. Naval Air Station in Pensacola, Florida. It says he enlisted in 23 Oct 1940 in Chicago, which is close to his hometown of Milwaukee. His “rating” at this time is listed as “AS,” which in naval terms stands for Aviation Support Equipment Technician. It also notes on the page that he transferred from US NTS (probably Naval Training Station) Great Lakes, Illinois.

The next listing is from 28 Feb 1941, where he is still located at Pensacola. This listing mentions that he has a change in rating (CR). It specifically says, “Rating changed from AS, to Sea2c in accordance with Art. D-5108(1) BuNav Manual.” “Sea2C” is listed as Seaman 2nd Class.  He is listed again in Pensacola in 31 Mar 1941, still rated as S2c (Seaman 2nd Class.)

The next listing on 31 May 1941 has two entries. The first entry is from Pensacola which mentions that he was transferred to the NAS (Naval Air Station) in Miami, Florida on 23 May 1941. The next entry is from Miami stating that he was received from Pensacola on 28 May 1941. He is again listed in Miami on 30 Jun 1941, though no changes were made, still a Seaman 2nd Class.

On 1 Dec 1941, Richard gets his next promotion from Sea1c to AMM3c, which during WWII stood for Aviation Machinist’s Mate, 3rd Class in his case. They were responsible for “maintaining aircraft engines and their related systems, including the induction, cooling, fuel, oil, compression, combustion, turbine, gas turbine compressor, exhaust and propeller systems” and many other things. The last muster roll entry for Miami is on 31 Mar 1942 where he is still listed as an AMM3c.

There are two entries I also found on ships that are more than likely my grandfather. The “Service Numbers” on the entries match up from the earlier entries. I know the earlier entries were him due to records and photos I have. Though, he never saw combat, he may have been on a ship while it was docked in America. The first entry was on the USS Orizaba on 10 Jul 1944. Though, the ship is listed as travelling from San Francisco to “FRAY.” I’m not sure what “FRAY” is. This matches up with the history of the Orizaba as it says, “Back at San Francisco in June [1944], she underwent repairs; completed a run to the Marshalls and Marianas; and then sailed north to the Aleutians.” He is now listed as AMM1c, so he has been promoted to 1st Class since 1942.

The next and final entry I have found was for the USS Shangri-La on 1 October 1946. Again, the “Service Number” matches and this record matches up with the historical record of the ship, “she made a brief training cruise to Pearl Harbor, then wintered at Puget Sound Naval Shipyard.” He is still rated as an AMM1c. This entry contains some information that I can’t quite figure out at the moment. I’ve browsed through the whole muster roll and can’t find explanation of the abbreviations and acronyms they’re using or what the columns mean.

The first entry may mean something like “For Further Transfer (FFT) Work Completed (WC) Discharge (DISCH)” I know he finished his naval work in 1946. Maybe this was the ship he took from Pearl Harbor back to the contiguous 50 states after serving in Hawaii.

While I was aware of a lot of my grandfather’s navy duties during WWII, it’s neat to see them written in government documents. Though, there is no information from his time spent in Hilo, Hawaii from which most of the photos I scanned a put online were from.