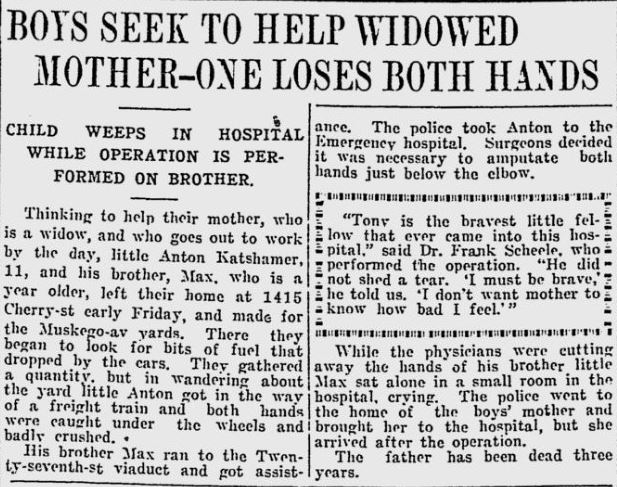 This all started when, on a whim, I decided to see what happened in Milwaukee 100 years ago. I went to the Google News Archive site for The Milwaukee Journal and brought up the paper from March 19, 1915 (I know, I was one day off.) I read a few front-page stories and then ran across one titled, Boys Seek to Help Widowed Mother-One Loses Both Hands and the subtitle says, “Child Weeps in Hospital While Operation is Performed on Brother.” How could I not keep reading?

If you can’t read the article, it basically talks about two boys who went off to a train yard to collect bits of fuel (probably coal) that fell off of the trains. While running between two cars, one boy had his hands crushed between them when they moved. In the end, he had to have them amputated at the elbows.

I was now very interested in what happened to this boy, Anton Katshamer, as named in the story. I went directly to FamilySearch and tried looking for that name, but no luck. After playing with the names, spelling, and family members, I ran across a family in the 1910 Census for Milwaukee with all of the correct people; a boy named Max, a younger boy named Anton. Though, their last name was spelled, Kopfhammer. I then found the family in the 1920 Census. This time without a father, which lines up directly with the story that mentions “the father has been dead three years,” so in 1912.

I went to our trusty friend, Google, to try to find more. My search for Anton brought up 3 more articles from The Milwaukee Journal from later in 1915. The first one, from April 10, 1915, is titled Workers Help Fund For Tony. It mentions how a few local companies and individuals put together some money for Anton and his family, totaling $2,318 in this article, including a man who sent in his 35 cents that he saved by skipping his noon meal.

The second one from later in April on the 20th, titled Guardian Named For Boy Who Lost Hands. It mainly talks about who took over Anton’s guardianship while he works on learning to live without hands, including, hopefully, getting artificial hands.

The last one from December 1915 is titled Injured Boy Gets $15,000 in Court. $3,000 of that came from the local businesses and individuals and $12,000 came from the railroad company, though without involving a lawsuit. There are some funny quotes from Anton in this article.

“I don’t know what I will be when I grow up to be a man,” continued Tony, “I can’t be a fireman or policeman, and I might be a lawyer. They have been nice to me.”

It was suggested that Tony would not be a howling success as an attorney without hands, as one of the great requisites for financial success is five flexible digits on each manual extremity.

I also found a death record for an Anton Kopfhammer matching the dates from California in 1989, though no luck on obituaries or more information. I’d really like to see what he became when he grew up. I’ll keep you posted if I find anything more. It’s amazing what information you can find with the records available today.

Who Do You Think You Are?
Genealogy of the States: Colorado
Wordless Wednesday