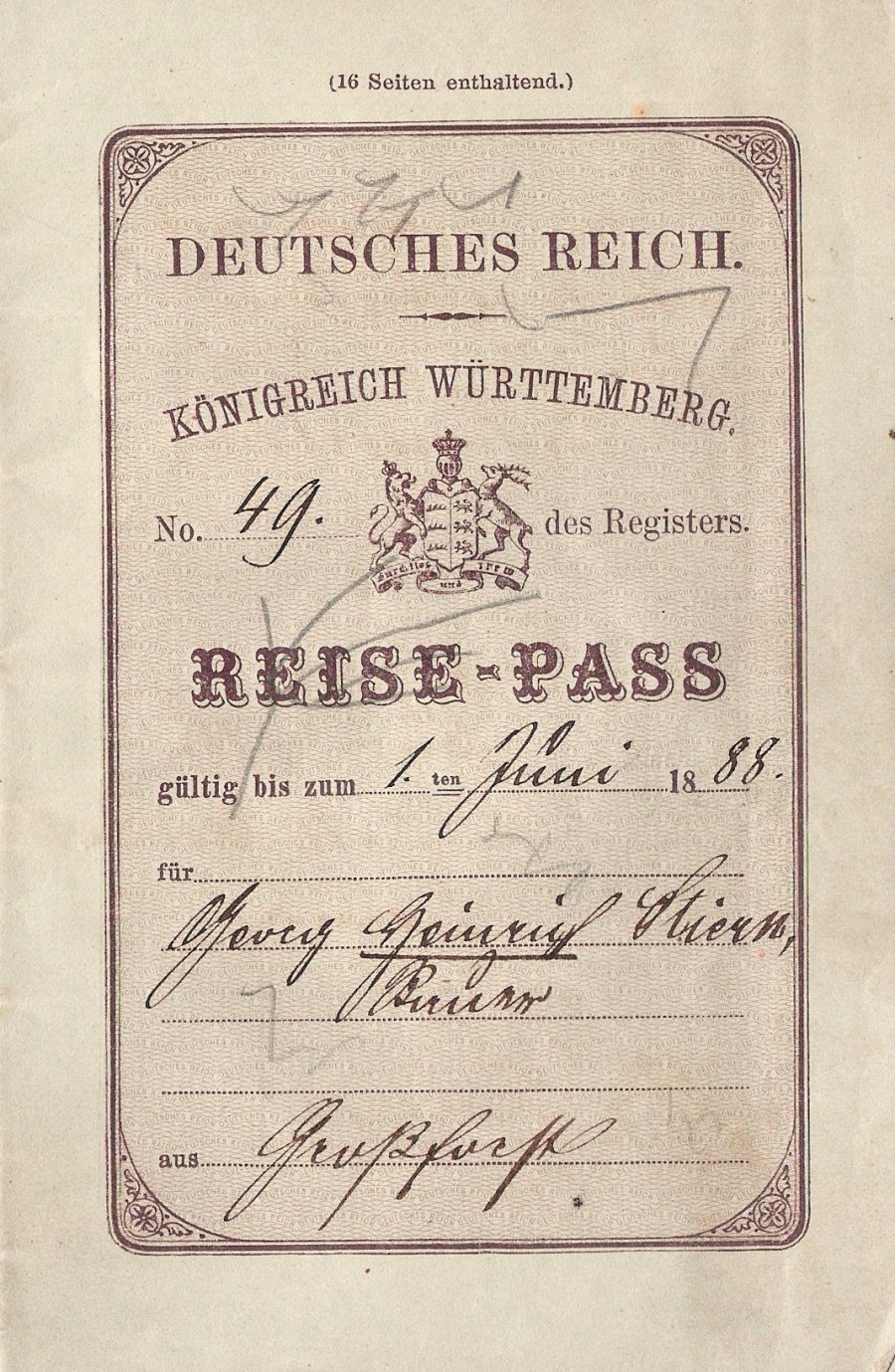 The twenty-second ancestor in my 52-week challenge is my paternal 3rd-great-grandfather, Georg Heinrich STIERN (also known as Henry STEARNS.)

I had him in my database a Henry Stearns for a long time. He was my great-grandmother’s grandfather and my information ended with him. After my paternal grandmother passed away, we found some old documents in her boxes of old family stuff. One such document was an old German booklet. It turns out that this was Henry’s passport from when his family left Germany and came to the US in 1888.

You can see the title page from the document at the right. It turns out his full name is Georg Heinrich Steirn. On another page in the booklet, it lists his current family members, including his wife Katherina SCHUMACHER.

With this information, I was able to track his family down using some of FamilySearch’s German baptism and marriage records. So, now I have names a few generations back from both Henry and his wife back into the Baden-Württemberg area of Germany.

Henry passed away on 28 July 1900 somewhere is Wisconsin, most likely Waupaca County where he is noted to be buried at Oakwood Cemetery.

It’s time for another one of Randy Seaver’s Saturday Night Genealogy Fun posts.

According to my blog, it seems I did this line for myself already. Though, I will post it again in case something is more up-to-date. I will do my father’s line and also my wife’s line since I haven’t really inspected those before. Here is mine, first.

Unfortunately, my matrilineal line is one of the few lines in my tree that is somewhat short, though I have not done a ton of research on it. I have done a DNA test, so I do have my mtDNA information. According to the latest 23AndMe info, my Maternal Haplogroup in H11a. I have made my 23AndMe Maternal Line page public, so you can view more details there. It does match the German ancestry that I find in my research.

Next is my father’s matrilineal line, though there is no mtDNA haplogroup info since my DNA does not have that information. Only his DNA (or his sibling’s) would show that.

END_OF_DOCUMENT_TOKEN_TO_BE_REPLACED

Today I received another great email that two more of my ancestor’s headstones were found and photographed by a friendly Find-A-Grave volunteer. I don’t remember when I requested these, but it’s nice to finally know where they are located. Though, it’s interesting to see that their headstone spells their name Sterns, instead of Stearns. Click the thumbnails for larger versions.

My 3rd-great-grandparents, Henry Stearns (also known as Georg Heinrich Stierns) and his wife Margaret (also known as Katherine Rosina Margaretha Schumacher), immigrated from Württemberg, Germany with their four children and settled in northern Wisconsin. They are both now buried at Oakwood Cemetery in Weyauwega, Waupaca Co., Wisconsin.

The important dates for this week in our family history. As always, you can find this info on the Dates & Anniversaries page.

1915 – Died – Thomas J CORRIGAN – Thomas is my great-great-grandfather on my father’s side. He was born on 3 Mar 1855 in Mara Township, Brechin, Ontario, Canada. He married Emma Jane FIRMENICH, his second marriage, in 1892 and together they had 9 children. Thomas passed away on the same day his youngest daughter, Sadie, was born. He is buried at St. Agnes Cemetery in Ashland, Ashland Co., Wisconsin.

1751 – Married – Pierre François QUINET & Thérèse DARD – Pierre and Thérèse are my 7th-great-grandparents on my father’s side. They we married at Contréglise, Haute-Saône, France and together had 7 children including my ancestor, Antoine QUINET.

1921 – Married – Leon DEBROUX & Mildred VAN PRICE – Leon and Mildred are my great-grandparents on my mother’s side. They were married at Mattoon, Shawano Co., Wisconsin and together had 6 children. They later moved to Port Washington, Wisconsin where they lived the rest of their lives. Leon passed away in 1982 and Mildren later in 1994. They are buried together at St. Mary’s Cemetery in Port Washington.

1900 – Died – Georg Heinrich STIERNS – Georg is my 3rd-great-grandfather on my father’s side. He was born in 19 April 1935 in Württemberg, Germany. He married Katherine Margaretha SCHUMACHER in about 1862. After they had 4 children in Germany, they emigrated to Wisconsin in about 1881. The name was also listed as STEARNS.

1684 – Died – Eleanor (ALDERSEY) CUTTS – Eleanor is my wife’s 10th-great-grandmother on her mother’s side. She was born about 1682 in Portsmouth, Rockingham Co., New Hampshire. In 1649, she married Richard CUTTS. She passed away in Portsmouth 9 years after her husband.

1886 – Died – Jean-Baptiste LAURENT – Jean-Baptiste is my 3rd-great-grandfather on my mother’s side. He was born on 18 Jan 1825 in Biez, Chaumont-Gistoux, Walloon Brabant, Belgium to Constant and Marie (BERO) LAURENT. He later emigrated to America and married Olivine ST. LOUIS in 1857 at Little Chute, Outagamie Co., Wisconsin. He is buried at St. Joseph’s Catholic Cemetery in Norwood, Langlade Co., Wisconsin.

1838 – Born – Margaret SCHUMACHER – Margaret is my 3rd-great-grandmother on my father’s side. She was born in Wurttemberg, Germany. She married Henry STEARNS in about 1862 and then immigrated to Wisconsin. She passed away on 9 May 1908 at Philips, Price Co., Wisconsin and is buried nearby at Oakwood Cemetery in Weyauwega.

1665 – Died – Etienne LAFOND dit Mongrain – Etienne is my 10th-great-grandfather on my mother’s side. He was born about 1615 at St. Laurent, Saintonge, Xaintes, France. He married Marie BOUCHER in 1645. He passed away at Trois-Rivieres, St. Maurice, Quebec, Canada.

1982 – Died – Leon Joseph DEBROUX – Leon is my great-grandfather on my mother’s side. He was born 2 Nov 1901 at Phlox, Langlade Co., Wisconsin. He married Mildred Vida VAN PRICE in 1921 and had 5 children. He passed away at Port Washington, Ozaukee Co., Wisconsin and is buried there at St. Mary’s Cemetery.

1656 – Married – Jean CUSSON-CALLIOU & Marie FOUBERT – Jean and Marie are my 10th-great-grandparents on my mother’s side. They were married at Trois-Rivieres, St. Maurice, Quebec, Canada. They had 5 children including my ancestor, Marie-Madeleine CUSSON-CALLIOU.

1835 – Born – Olivine Marie ST. LOUIS – Olivine is my 3rd-great-grandmother on my mother’s side. She was born at Yamachiche, St. Maurice, Quebec, Canada. She married Jean Baptiste LAURENT  in 1831. She passed away on 20 May 1920 at Phlox, Langlade Co., Wisconsin and is buried nearby at St. Joseph’s Catholic Cemetery in Norwood.

1718 – Born – Jeanne Catherine BARBUT – Jeanne is my 7th-great-grandmother on my father’s side. She was born at Contraglise, Haute-Saune, France. She married Jean Claude MARIZOT in 1748. She passed away before 1781.

1956 – Died – Mary Philomene LAURENT – Marie is my 3rd-great-grandmother on my mother’s side. She was born in December 1865 in Wisconsin. She married Joseph DEBROUX on 8 Sep 1891 at Langlade Co., Wisconsin. She passed away at Wausau, Marathon Co., Wisconsin and is buried at St. Joseph’s Catholic Cemetery in Norwood, Wisconsin. I’m not sure who is in this photo. It was located in the BRAATZ area of my grandmother’s photo album, but it is no labeled. I have yet to ask her personally if she knows. The girl in the middle does somewhat resemble a photo of my 3rd-great-grandmother, Margaret (SCHUMACHER) STEARNS, so maybe it’s her and some relation to her.

When I bought my house in 2005, I ended up purchasing my grandparent’s house. My grandpa had passed away in 1999 and my grandma was moving into an assisted living apartment since she hurt herself in a little fall. I did get a very nice deal on the house. It’s perfect “starter” house, being the house that they bought new in 1955 and that my dad and his siblings grew up in.

When she moved, a bunch of boxes were left in the basement. Most of it was just things like blankets and pots and pans, things she doesn’t need right now. I found one box a few months back when I was taking inventory that I saw had funeral cards and old newspaper clippings in it. Today, I decided to just browse through them to see if there were any of my ancestors that I could use to squeeze out some more information.

I only found a few funeral cards on the top and they were probably of old friends, I assume, and not relatives. But, I did find a nice collection in the news clippings box. Most of the items were just random clippings of recent photos and articles from the newspapers. But, I did find a nice selection of old obituaries, though. A couple were straight from the newspapers and a few others were copies. The obituaries that I found were from Emma Jane (FIRMENICH) COOK (my gg-grandmother), George S COOK (Emma’s 3rd husband), Margaret (STEARNS) BRAATZ (my gg-grandmother), Frank F BRAATZ, Sr (her husband and my gg-grandfather), and Margaret (SCHUMACHER) STEARNS (her mother and my ggg-grandmother.) Most of the obituaries didn’t have any new info of note, but the big find was the last one. In my tree, all I had was “Margaret” listed and her death date. This obituary gave me her birth info and her surname, which is brand new to me. Plus, it listed all of her siblings and locations. I need to start looking for SCHUMACHER now, any tips?

Another treasure find in the box was some old letters written to my grandfather from his parents in 1941. It seems, from the address that he was in navy school in Pensacola, Florida. There are about 5-10 letters all written from March 31, 1941 to April 27, 1941. One weird note here is that my great-grandmother, his mother, Emily (TROKA) ZALEWSKI, passed away on May 1, 1941. In the later letters that I just quickly scanned through, there is no mention of being sick, etc. So, this points to her death being quite sudden as she was only 45 years old at the time. Maybe my grandfather saved these letters due to the fact that he was away in Florida when his mother died. There are no letters beyond the April 27th one. I am in the process of scanning them so I can read them and archive them. This is the only comunication from my great-grandmother that I’ve found. Then, I plan on taking this box over to my grandmother since I’m assuming she’ll want it.