The End of the mtDNA Line

The twentieth ancestor on my 52 week challenge is my wife’s 4th-great-grandmother, Susan (SKINNER) WARNER.

Susan is also the furthest back we have documented on my wife’s mtDNA line (mother’s mother’s mother, etc.) Her mtDNA/maternal haplogroup is HV0, which is very heavy in Europe, especially in the British Isles and Scandinavia.

What we do have on Susan Skinner is that she about born sometime around 1813 in Connecticut. We don’t know her parent’s names, but we do know that she married Seth WARNER on 13 September 1832 in Chautauqua, New York. Sometime between 1836 and 1838, the family moved to Waupaca County in central Wisconsin. Here my wife’s ancestor, Helen Marion WARNER, was born.

Susan passed away on 9 August 1865 in Waupaca County and is buried at Lind Center Cemetery in that county.

The sixteenth ancestor in my 52 week challenge is Emma Lucretia (DOUGLAS) LANT. She is my wife’s maternal 3rd-great-grandmother.

She is said to be born 16 October 1845 in New York City according to census records and her entry at Find-A-Grave. Her parents are Randolph & Sarah Emma (MOORE) DOUGLAS. New York City is known to have pretty good records, so I should be able to do some more deep research of Emma and her family.

At some point she ended up in Wisconsin. I’m not sure if her whole family came with because I don’t have a lot more information on her parents. In about 1865 she married George William LANT somewhere in Wisconsin. They settled in Almond, Portage County, Wisconsin as their first 6 children (out of 8) were born there, including my wife’s ancestor, Nettie Adalin LANT, in 1873.

I always thought her middle name of Lucretia was interesting. It’s a name that isn’t seen all too often. A quick search indicates that the name is best known as “the name of a Roman matron who committed suicide in public protest against dishonor.” She may have been named after her maternal grandmother, who we have documented as Lucretia RYON. I don’t remember doing a lot of research of that family line, so I don’t know much more.

Emma passed away on 9 September 1909 in Waupaca, Waupaca County, Wisconsin. She is buried back in Almond at the Almond Village Cemetery. 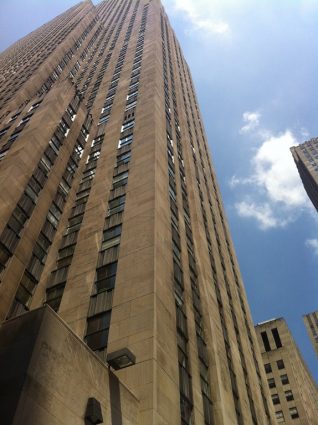 It seems I took one of my unplanned breaks again. Sometimes the perfect storm of not having much time and my interest in other things comes together and I don’t get any genealogy time. It’s been a busy few months, especially the last few weeks. Last week I was finally able to visit New York City, something I’ve wanted to do for many years. My wife was attending a conference there, so the whole family tagged along. My main job was to keep an eye on our 21-month-old daughter while my wife did conference-y things. Due to that, I didn’t get to tour everything I would’ve liked to, but I am still young overall, so I will probably get another chance. It was still great to just see the city. (More photos below)

We were situated in Midtown Manhattan at the Hilton New York, so anything within walking distance was fair game. I took my daughter on walks almost everyday so we got to see Times Square, Radio City Music Hall, Rockefeller Center including 30 Rockefeller Center (aka 30 Rock, the NBC headquarters), and Central Park where we spent a lot of time. I would’ve liked to see things like the Statue of Liberty, Ellis Island, Castle Garden, and Ground Zero, but didn’t get the chance. Interesting fact, none of my direct ancestors stepped foot in Ellis Island (apart from maybe visiting, but I doubt it.) All of my family arrived before it opened. The only close one is my great-great-granduncle, Jacob ZALEWSKI. He arrived at Castle Garden in 1891.

To put it into a genealogy perspective, I don’t have very many ties to the city. It’s rumored that my 3rd-great-grandfather, William “Curly Bill” CORRIGAN, was born there after the CORRIGAN family arrived in North America. On my wife’s side, it is said that both her 3rd-great-grandparents (who were married), George LANT and Emma DOUGLAS were both born there in 1842 and 1844, respectively.

After visiting, I am interested in the city’s history. I did some reading while I was there, mostly on Central Park, which was actually very fascinating. It’s a beautiful park which looks so out of place right in the middle of Manhattan, but it is definitely a nice place to relax from the busy, busy city rush.

The trip was nice and was only marred by a “slight” 5-hour delay on our flight home due to storms. Normally, while that would be annoying for myself, it was much more difficult while traveling with a 21-month-old. We made it home safely and all is well.

I’ve been on a roll this week finding information in unexpected places. Earlier it was the cemetery website and newspaper archives.

Tonight, I went to the FamilySearch website to see what records they may have on Goczałki or Gottschalk, the area of Poland that I’m targeting in my latest research according to a recent post. I actually never got to finding the records since I was sidetracked by a link they had labeled “Free Classes.” I assumed these were classes at the local Family History Library and thought that they may be interesting. It would both get me to one of the libraries and also maybe learn more about how to use them. Instead, these are online classes. The one I picked was Introduction to Polish Research, which was about 53 minutes long. I paid attention for about 23 minutes when she was talking about ship manifests and origin locations. She recommended searching the passenger lists by origin location instead of by name. This way you could find other families that came from the same area. She also mentioned the amazing genealogy search website setup by Steve Morse at stevemorse.org.

I’ve used his site previously to find updated streets and addresses for Milwaukee and also converting the 1930 Census occupation codes. It’s not the prettiest site, but neither is Google. I never really got into the other search tools that he created, so I just started going down each of his passenger list tools pasting Gottschalk into the “Place of Origin” box. Not much luck. I did find Orlowski and Sobieski families, but I don’t have those names in my family tree. Then I got towards the bottom, beyond the Ancestry.com tools, and into a very basic looking one called Germans to America (1850-1897). It sounded too broad, but let’s try it. It came back with four people from Gottschalk, but one caught my eye, Jakob Salewski. The information didn’t give a port of arrival, but it did give an arrival date of 17 Sep 1891 and a ship name, the Rhynland. 1891 was the year of immigration listed on most of Jacob ZALEWSKI’s records. His age is also listed as 28, which calculates to about 1863, which also matches my Jacob.

I searched Ancestry’s immigration database for the keyword “Rhynland” and found one arriving in New York on 17 Sep 1891. Fortunately for me, Ancestry has a lot of New York passenger lists. What is interesting is that I’ve searched over and over for Zalewski, Salewski, and all other variations. I also tried all forms of Jacob and 1891 trying to find him. So, next, I browsed the New York records manually, picking 1891, then September, and then 17. As I had hoped, there was a “Rhynland” entry. I started browsing it manually page-by-page and found Jakob Salewski on page 16 of 19 and it did say he was from Gottschalk. This matches all of the other information I’ve been leaning towards. Interestingly, he is also traveling with two other men from Gottschalk, but they don’t ring a bell and who knows if they went to Milwaukee, also.

So, my next step (out of many other steps) is to see what records I can get for Goczałki and start digging. What a week.