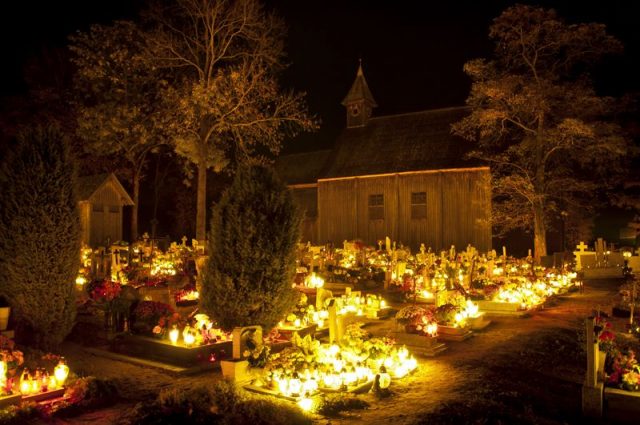 Update 11/5/2014: I made another run-through of this translation and am fixing a few things.

I recently took another shot at translating an entry from the Slownik Geograficzny. This time I worked on translating the entry for Święte, which is the town where my great-great grandparents were married and some of their family had lived.

Here is my translation. You can find the original entry by visiting the University of Warsaw’s website that allows you to view the original book with a Firefox plugin. You can also view it on this site, without a plugin, though the site is in Polish so you may need some translation.

The translation is a work-in-progress and is obviously not completely perfect. I am grateful for some help from Al at Al’s Polish-American Genealogy, who has translated many entries himself. I will mark the words or phrases that I am confident are wrong or are not even translated as I could not find any information on them, with italics. The rest, while they may not flow very well, are mostly right and just need some small tweaking. Some of the diacritics on the letters did not copy over, I plan to fix those once I have some time. Any errors in the translations are completely my own.

A few terms that may be confusing are: morg: a unit of land measurement; in this area 1 morg = 0.631 acres – wlók: a unit of land measurement used in Poland, was generally about 30 morgs, but this can vary, depending on what part of Poland and what time-frame one is concerned with. Generally 30 morgs was considered a full-sized farm, big enough to support a family. There are others, though you can find most definitions here if you get confused.

Święte already existed before the arrival of the Crusaders and, according to the legend, took its name from here, the locals, as zealous Christians, suffered martyrdom at the hands of the Gentiles. When the Crusaders on the court originally founded a new village here, the court removed its ancient name and took from his judge Henning, the name of Hennyngesdorf. But the name was not accepted by the people (refer to Ketrzynski “The Nation of Poland”, str. 98). Therefore, during the time of Pawla of Russdorf (1422-1441) returned the name of Święte.

For the first time in 1314 it mentions Karl von Trier, issued a city charter for Łasin. In 1366, Winrich von Kniprode updated the city charter, having a cover with peat bog 101 wlók and 11 morg boundaries to account for: Waldowo, Szonowo, Lasin and Rogozno. The mayor has 7 włóka [regarded as a “full–sized farm,” one big enough to provide a living] free for Chelmno law and collects 1/3 of court fines, 2/3 the law. The pastor has 6 free wlók; the rest of the inhabitants of the wlók are almost all inherited as part of Chelmno, however, every year on the day of Saint Martin to levy rent half of the fine and 2 hens. If he showed more or less wlók, this applies to it and rent. Dan Rogoźno, who was komturship [a rank within military orders, especially the Teutonic Knights], or aldermanship, owned Święte.

In 1414, loss of the Teutonic Knights’ Hunger War, the village suffered 2226 grzy [monetary unit] worth of damage, also 3 people were killed.

Around 1667, Jan Dabrowski held the lands that his father Feliks had held previously. A visitor found a demolished church, does not know whether it was the only parish or chapel; claimed it was a brick foundation. By the lake lay a cemetery. It was said that the church had the title of Saint Barbara and that the parish had four wlók but no one knew how to mark their boundaries. On the spot of the church a cross stood tall (refer to p. 489). Already at that time the wlók was converted into a rural manor. According to the fees paid to Święte in 1722, 12 grzy [monetary unit] by the heir of Kozlowski, who pledged for so long to use the land for a parish rectory in Łasin to pay 60 florians annually by his son Waclaw Kozlowski, heir to Święte and Goczalkach. Asked the bishop of the parish to give to him 4 wlók , partly overgrown chróstem. The church was set up in 1736 and a stone wall was erected for the Prussian rectory by the first priest, Adempski, whom was installed in the year 1733.

After Kozłowski took over the lands in about the year 1741, the local judge of Chelmno Adam Kosowski took possession of the land. He is sued and replaced and put on trial for the rest of the parish wlók and won it, such that it once again included the rectory’s 6 wlók valued as a charter of the Teutonic Order in the year 1366, for the parish. It was then 6 wlók in the Swiete field, 8 in Krzywce, 6 in Wałdówku, 2 in Józefów, in addition to five homesteads in Lessenwalde.

In the year 1777 belonging to the local key: Święte , Huta, Kozlowo, Krzywka and Waldówko, 89 wlók total 6 1/2 morgs, between 20 morgs that of meadows, 20 wlok forest, a vegetable garden and fruit by 3 morgs, lake by 9 morgs, bordering wilderness of a wlók and 24 morgs, an inn, windmill, in addition to orchards, the right to hunting, brewing beer and patronage of the church. Święte itself included 57 wlok and 6 1/2 acres and brought in, together with the forest and garden, 596 talar 88 grzywny net profit.