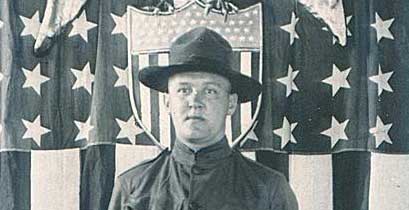 The other day I happened to run across the Digital Collections of the Milwaukee Public Library. As any genealogist does, I got lost in it for an hour or so. I then found their WWI Military Portrait collection and searched for “Zalewski.”

I found entries for my great-grandfather, Joseph Frank Zalewski. While it did not have an actual portrait for him, it did have a war service document from the “War Mothers of America.” Most of the information on his document wasn’t new, though it did mention that he participated in no major battles during the war.

There was another Joseph Zalewski listed, which I correctly assumed was my great-grandfather’s cousin, son of Jacob Zalewski. His information was also pretty familiar. He did participate in a battle, the ChĂ˘teau-Thierry Vesle Offensive. The part of his document that caught my eye was under the field titled Next of kin. He listed Joseph Goralski. I have been trying to figure out the connection between the Zalewski, Goralski, and Gwiazdowski families for years now.

There are many instances of these families crossing into each other, but I just can’t confirm anything. My hope is that connecting them may finally allow me to break down this old Zalewski brick wall. Though, this is the first time that Joseph Goralski is specifically mentioned as “kin” even though that may not really mean blood relation. More mysteries, indeed.

Genealogy of the States: Colorado
From the Beginning..
Wordless Wednesday