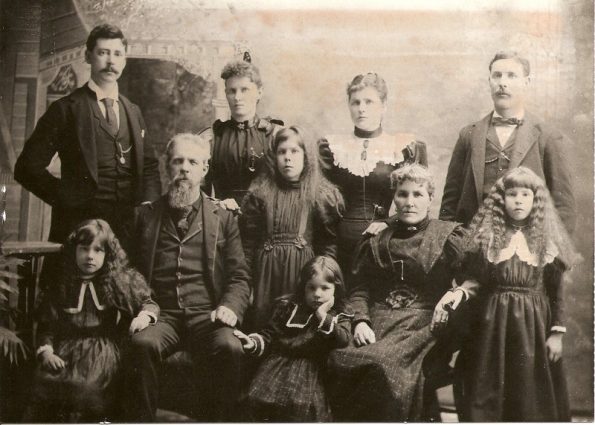 I decided to start up the 52 Ancestors in 52 Weeks project again. I last did it in 2014, even though I didn’t make it all the way through. Even if I don’t again this year, it still allows me to dig deeper into specific ancestors. As always, you can view all of the 52 ancestors here, updated as I post.

The first ancestor of 2017 is my paternal 3rd-great-grandmother, Pauline Henrietta (THOMPSON) FIRMENICH, also known as Polly. I’m related to her via my father → his mother (Mary Jane CORRIGAN) → her father (Maurice CORRIGAN) → his mother (Emma Jane FIRMENICH) → her mother (Polly THOMPSON).

Polly Thompson was born on 5 May 1849 in the town of Granville, Milwaukee County, Wisconsin. She first shows up in the 1850 Census for Granville at one year old with her parents William and Frances THOMPSON and siblings. Granville is still mentioned today, though more of as an area of Milwaukee than an incorporated location. It is on the north side of Milwaukee County near today’s Brown Deer and Menomonee Falls.

By the time the 1860 Census rolls around, Polly and her family have moved north on to the town of Morrison, Brown County, Wisconsin presumably with the Firmenich family who also lived in Granville. On February 11th, 1867, Polly marries one of the Firmenich men by the name of Mathias FIRMENICH. According to the Wisconsin Marriage Certificate, the marriage took place in the nearby town of Holland and the witnesses were Chas F Cross and Polly’s sister, Emilia Thompson.

Their first child, Albert, is born in nearby Wrightstown in March 1868. Two more followed before the birth of my great-great-grandmother, Emma Jane, in June 1873. When all was said and done, they had a total of 13 children. According to the obituary of Emma Jane in 1941, the Firmenich family moved from Wrightstown in 1882, finally settling way in the north of Wisconsin into the forests of Ashland County.

Tragedy struck in early September 1885 when an outbreak of Diphtheria plagued the family. Within only a few days, the disease took the lives of at least three of their children, though probably four, including Hattie (6), Edmond (4), Sarah (2), and possibly Anna (8). Adding to the chaos was the fact that Polly was pregnant during this time as their daughter Rose was born there on September 20th, 1885.

Polly shows up again in the 1900 Census and 1905 Wisconsin State Census in Ashland. In 1910, Polly passes away. I have no exact date, just the date from her headstone at Saint Agnes Cemetery in Ashland where she is buried near the children she lost in 1885. She is not listed in the 1910 Census, Mathias being listed a “Widowed.” The Census for their home was taken on April 30th, 1910, so we can assume she passed away sometime before then.

I have only one photo of Polly, which is the from the family photo on this post. I estimate the photo was taken sometime around 1895 based on the ages of the children and (not joking) Mathias’ beard length.

Something new I’d like to add to these posts this year is determining if and how DNA may play a role in my relationship. I have yet to find any proven DNA that I share directly with Polly. I do have matches from that side of the tree that share Polly as an ancestor with me, but we don’t yet know where those chromosomes or positions may be.