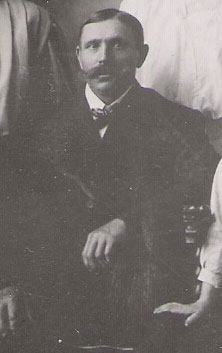 The thirty-first ancestor in my 52-week challenge is the ancestor that I’ve probably written about more than any other, my paternal great-great-grandfather, Frank J ZALEWSKI, Sr. Unfortunately, this is probably the shortest line I have. He was the inspiration for me to start a lot of my research, this blog, and my Everything I Know About websites as his was the first.

Frank J ZALEWSKI, Sr was more than likely born around 4 September 1858, though I also have February 1860 as listed in the 1900 Census and 1905 Wisconsin State Census records. All other records indicate 1858. Obviously, there are many different entries for birth place as that area of the world went through many changes. I’ve mainly seen Germany and Prussia listed, so it’s possible that it was in a more German area.

He married Ms. Anna LINDNER (b 27 Nov 1854) on 2 November 1884 in, what was at the time, Schwenten, West Prussia. Today, it is located at éwiáte, Gmina éasin, Grudziádz County, Kuyavian-Pomeranian Voivodeship, Poland. My notes always had it listed as January 1885 in Poznan, Poland. While Poznan is sort of nearby, it’s not really that close to éwiáte. I imagine someone just picked the largest city in the area. The record notes that Frank was from nearby Gottschalk, which is now called Gocza?ki.

After looking through all of the records in the Schwenten parish, I found no other mentions of the Zalewski surname. My gut tells me that Frank (and his brother Jacob) are not from the area originally. Family stories indicate that Frank may possibly be from the Russian side of Poland.

Another Zalewski researcher (and semi-distant cousin) put together a Zalewski booklet a few years ago. In this booklet, these notes are listed (though they are from research prior to me finding their marriage record, so some info does not line up):

There is, however, a conflicting story as to the area of Poland from which Frank and Anna originated.  During a 1993 telephone interview with another granddaughter, Irene (Zalewski) Lutzenberger, she indicated that her late father [Editor’s Note: my great-grandfather, Joseph Zalewski] had always said his parents came from eastern Poland — an area then under Russian rule.  Irene’s father also stated that when his parents entered the United States, their surname was spelled “Salefsky,” thereby reflecting the Russian influence.  Although no official documents can be found to verify this, it is interesting to note that in the 1934 obituary of another grandchild, Norbert Cybela, the maiden name of Norbert’s mother is spelled “Zalesky.”

It is hypothetically possible that Frank Zalewski, Sr is, indeed, born and raised in Russian Poland and, at some later point in his life, moved to the German section in which Poznan Province was located.  Although traveling across political borders was difficult in 19th-century Europe, to say the least, it was not impossible.  In Russian Poland, for example, all debts to the government, including military service in the czar’s army, had to be fulfilled before travel documents would be issued and borders would be crossed.  Two years of active military service followed by two years in the reserve forces was required of all males when they reached their twentieth birthday.  In Frank’s case, that would have accounted for the years 1878 through 1882.  We know he married Anna Lindner (a German) in January 1885, which means he probably relocated from Russian-held, eastern Poland to the German-held, western area sometime between 1882 and 1884. This, of course, is only speculation but would explain the Russian “sky” ending on the surname.

I’ve taken some of this into account when researching, but to no avail yet. It turns out that finding a Zalewski in Poland is almost as fun as finding a Smith in America.

Frank and Anna immigrated to the United States in about 1889. It’s listed that they arrived at the Port of Baltimore from the German port of Bremen. I found the ship manifest a few years back. The notes from the research booklet also talk about their immigration, though again, information prior to me finding the manifest:

Frank Zalewski, Sr., his wife Anna, and their two oldest children – Martha and Angeline, emigrated to the US from the Baltic port of Danzig and arrived in Baltimore, Maryland, in 1890.  The couple’s third child, Mary, was born in Baltimore in March 1891.  The family then traveled west to Nebraska and east, from there, to the Polish community in Chicago.  By May, 1892, the family had settled in Milwaukee, Wisconsin.

When researching their third child, Mary, I have her born in places from Poland, Baltimore, Ohio and Milwaukee, so I’m not sure yet. I’ve done a bit of researching into Nebraska and Chicago, but I haven’t found any helpful record collections yet, especially since the 1890 census is mostly missing.

After a bunch of lucky records and pieces falling into place, a few years ago I found Jacob Zalewski, who by all accounts is Frank’s younger brother. I had hoped digging into his info would give me more info on where Frank originated, but nothing big has come up, yet. Though, it is another path for research and even Y-DNA tests, since Frank is my direct paternal ancestor. Frank’s Y-DNA haplogroup is R1a1a.

They are also listed in the 1905 Wisconsin State Census, but I have to find them in the 1895 State census, though that one isn’t as detailed. This one has Mary born in Poland Germany. Agnes, the last child, who was born in 1902, is now listed in this one.

In all of the census records it has Frank listed as “Laborer” for the City Park System. I had heard that he basically worked as a garbage man. Someone has to do it, right? I assume there wasn’t much to choose from being a fresh, and probably poor, immigrant. They are then listed again in the 1910 Census in Milwaukee, still living at 900 Fratney St.

Most of Frank and Anna’s children had moved out throughout these years with only son Frank, Jr and Agnes still living with them in 1920. Though, daughters Frances, Helen and Mary were living at the same residence with their respective families. They were still at 900 Fratney St on the northeast side of Milwaukee.

In 1930, only Frank, Jr was still living with Frank and Anna. Agnes had moved out and married Mr. Chester WALCZAK.  They were now living at 1008 Buffum St, which is still in the northeastern part of Milwaukee. That address is now considered 2630 N Buffum St, which if Google Maps is to be believed, is now just a park. Agnes and Chester also live at this residence as seem in the excerpt below.

According to the 1930 Census, Frank was retired by then. I haven’t found many records beyond the census records for Frank yet, though he is mentioned in some letters I found written to my grandfather, Richard Zalewski, from his mother, Emily (TROKA) ZALEWSKI (Frank’s daugher-in-law) in April 1941.

I got to go over by Grandpa (Daddy’s.) I go there every Monday, Friday and Saturday.

Will answer the letter in full next because I got to take care of Dad’s father.

It sounded like there would be more, but unfortunately, there are no more letters. Sadly, Emily unexpectedly passed away only days after the last letter on 1 May 1941. It seems as though Frank was ill in 1941 which matches up to the fact that Frank passed away later that year on 8 Aug 1941 at his home in Milwaukee. I have collected everything I have on Frank on my Everything I Know About Frank Zalewski website. Feel free to peruse that.

I started genealogy research about mid-1999. My grandfather had passed away in April of that year. Since then Iãve done a lot of research not only for myself, but for friends and other relatives. In 2006, I married the love of my life, Darcy, and welcomed the birth of our daughter, Aerissa Jean, in 2010 and our son, Xander Lee, in 2012. I canãt wait to tell them stories about all of their ancestors.
View all posts by Brian Zalewski →