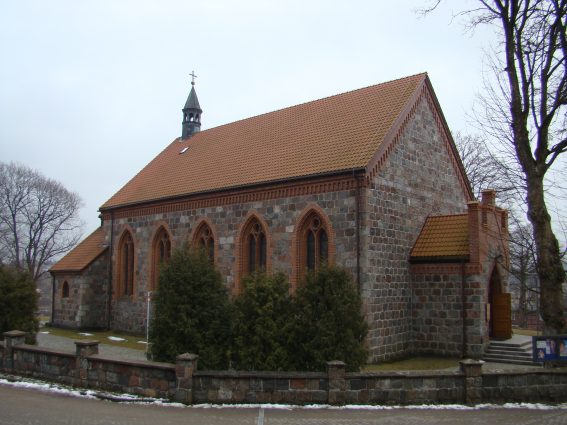 FamilySearch has a boatload of church records scanned and available online for Germany, Prussia, and Pomerania from 1544-1945, though I would estimate that most of them are in the middle of that range. Currently they’re not available for searching, but I did see them in the indexing software, so maybe they will be available for that soon. That means you must look through them by hand, like the good ol’ days.

It seems that a lot of families from this area of Wisconsin immigrated from that area, which is now mostly in Poland, so I’m in luck. I used this collection to find a few records so far. I found my 3rd-great-grandparent’s marriage record and my 3rd-great-grandfather’s baptism record (I’m pretty sure.) Keep in mind that the towns and parishes are not named the same as they were in the 1800s, so you can’t just go to Google Maps. Don’t worry, I’ve done some of the hard work for you and will show you how to find the records you need. Though, this won’t do all of the browsing record by record and trying to determine what someone wrote in German on old, ripped paper from 1840 for you, but maybe for a few bucks I can do that for you, too.

The key in all of this is an amazing site called Kartenmeister. They describe themselves:

Welcome to the most comprehensive database of its kind in the world. It contains 93537 locations with over 38.691 name changes once, and 5,500 twice and more.  Included in this database are the following provinces: Eastprussia, including Memel, Westprussia, Brandenburg, Posen, Pomerania, and Silesia. It currently list most towns or points, points being: Mills, some bridges, battlefields, named trees, cenotaphs etc.

END_OF_DOCUMENT_TOKEN_TO_BE_REPLACED

Found and Not Found

Since the weather started to get nicer here and the snow is mostly gone, I thought I’d tackle some research involving the cemeteries again. Two of my ancestors are known to have lived and died in the Port Washington, Ozaukee Co., Wisconsin area, but I had yet to pinpoint their final resting places.

I did some research and found that on the death certificate of my 3rd-great-grandmother, Charlotte (STRASSMAN) LAST, she is listed as having been buried at Union Cemetery in Port Washington. This is also where her son (my great-great-grandfather) and his wife are buried. I know I’ve looked through most of the headstones there in the past while looking for other LAST relatives, but I don’t remember seeing it. She did die in 1900, which means the stone may be unreadable/broken/missing/etc. One would also assume that her husband, Johann W G LAST, would also be buried there along with her (or at least nearby.) He did die almost 30 years before she did (more on that later.)

Today, since it was in the 50s outside, I decided to make another pass through the cemetery. I was planning on going anyway to get a requested volunteer photo via Find-a-Grave. I first walked through the stones in the older area figuring it should be in there, but I did not find anything (besides some very hard-to-read stones.) I then hit the next section, which does have some older stones on the edges. I also kept an eye out for military flags, stars, etc, especially the Civil War-related GAR signs. I then found a very worn headstone with the name “JHO. LAST”. I couldn’t make out the dates written on it until I realized it actually said “Co. K, 50th Wis Inf“ which was his exact Civil War information. Unfortunately, it had no vital dates listed, which I don’t have either. All I had for his death date was “Between 1870-1880” since he was listed in 1870 and then his wife was listed as “widow” in 1880. His birth date was based on the census records.

There was also no Charlotte LAST stone nearby, or any LAST’s for that matter. I checked the rest of the cemetery and still no Charlotte. Since her death certificate notes that she is here (and most of the family is here) I can only assume her stone is either missing, unreadable or broken. There was a large gap (note in the photo) next to John’s headstone, which seemed out of place, so it is possible that she is there. There is also a stone that just says “Mother” on it near her son, Charles LAST. but he died long after Charlotte. Charles’ wife Augusta is also buried there and the “Mother” stone could be talking about her.

But, that wasn’t the end of the good news for John LAST. It turns out I had his death date right under my nose the whole time. I found a listing of good Civil War indexes on Ancestry and decided to just search them all again. Most of the searches turned up documents I already had. Then I searched the “Headstones Provided for Deceased Union Civil War Veterans, 1879-1903” database. John was listed as recieving a headstone and on the index card it lists his death date as “14 Aug 1872.” That’ll teach me to make sure I check every database next time.

I emailed the Port Washington Historical Society to see if Union Cemetery has burial index to see if maybe they have a specific plot where Charlotte may be buried. We’ll see how that works out.