The fortieth ancestor in my 52-week challenge is my wife’s paternal 3rd-great-grandmother, Mary Jane (Lint) Dieter.

She was born 28 May 1842 in Ohio (some items say Pennsylvania) to Henry and Eleanor (Murphey) Lint. Her family may have been of the Pennsylvania Dutch or Mennonites as they lived in York, Pennsylvania and then to Holmes, Ohio before moving to Wisconsin. Information says that she married Johannes Dieter in 1859. He passed away about 1867 and she married his brother, Friedrich Dieter on 18 August 1868, whom my wife descends from.

With Friedrich, she had 12 children, including my wife’s ancestor, Emma Amelia Dieter in 1870.

Her death certificate says she passed away on 20 October 1913 in Dayton, Richland, Wisconsin. She is buried at Luther Cemetery in nearby Richwood Township. 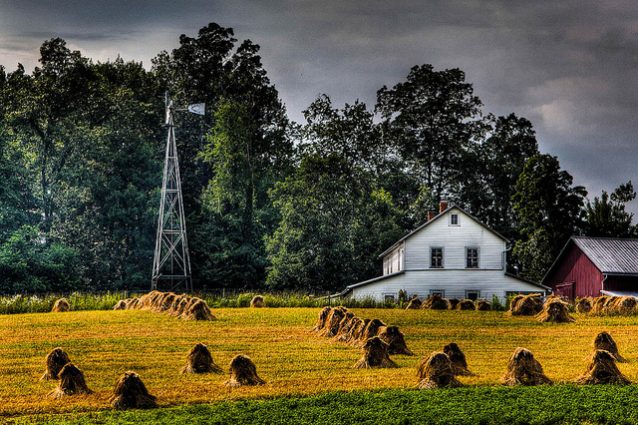 The twenty-fifth ancestor in my 52-week challenge is my wife’s 4th-great-grandfather, Henry LINT. This time I just seemingly picked an ancestor at random. I know very little about Mr. Lint and what I do have in the database may not be 100% correct, but that’s what these posts are for, right?

In 1833, Henry married Eleanor “Ellen” Murphey in Holmes County, Ohio. On a related note, Holmes County is home to the largest Amish community in the country and a lot of the Amish descend from Pennsylvania Dutch, which ties Holmes County back to York County.

In Ohio in 1842, Henry and Ellen gave birth to my wife’s ancestor, Mary Jane LINT. At some point, the family must have settled in southwestern Wisconsin, as Henry is buried there.

Photo: Sunset over Amish Farm by Alvin Trusty on Flickr