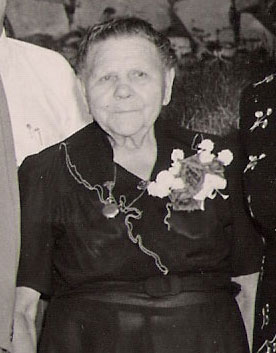 The third ancestor I chose on my 52 Ancestors challenge is my maternal great-great-grandmother, August (LUEDTKE) LAST. She holds a unique position in my ancestry as the only ancestor that I know of to have lived to at least 100 years of age. Though, she passed away 11 days (0.03 years) after her 100th birthday, but it still counts.

As the information I found notes, Augusta Johanna Wilhelmine Luedtke was born around 3 July 1863 in Storkow, Pomerania. Her parents are listed as Carl LUEDTKE and Friederike FRITZ on her marriage record. Funny thing about Storkow is that there are many villages with this name in old Pomerania, which is around modern-day northwestern Poland. There are at least 3 according to Kartenmeister. Fortunately, a lot of the church records for Pomerania are available digitally on FamilySearch. I’ve looked through a lot of them record-by-record in the vicinity of these towns with no luck, so the search continues. It’s one of those nagging brick walls that I always come back to since I feel that I’m very close.

According to census records, she emigrated to the US sometime around 1881-1882. This would make her about 18-19, so it’s hard to say if she came with her family or on her own, but I have found information on a sister living in Wisconsin, so that’s another avenue of research. This is also in that fuzzy area since the 1890 census is missing and by the time I find her in the 1900 Census, she is married and has had 11 children. Some of my next steps are to dig into Milwaukee records from this time as she was married there.

On 25 February 1883, she married Charles Carl LAST in Milwaukee. They soon settled in Grafton, Ozaukee, Wisconsin and, according to an 1892 Plat Map, they lived on a farm close to the town of Port Washington. Charles and Augusta were experts in the field of creating children as over the course of 25 years, they had 16 of them. My great-grandmother, Madora, was born in 1898. A few of them did not make it through childhood, but a lot of them went on to have full lives and create many, many cousins for me to connect with. I actually met a 3rd cousin from this family line through a match over on 23andMe and we’ve shared some information, including the first family photo I saw of this family.

Augusta’s husband died in 1926 soon after they moved out of the rural area and into a house in the City of Port Washington, right near the high school. After she had trouble getting around she moved in with some of her children, including my great-grandmother, where she was when she passed away. She lived long enough that my mom can remember things about her. Augusta passed away 11 days after her 100th birthday on 14 July 1863 and is buried with many of her family at Union Cemetery in Port Washington.