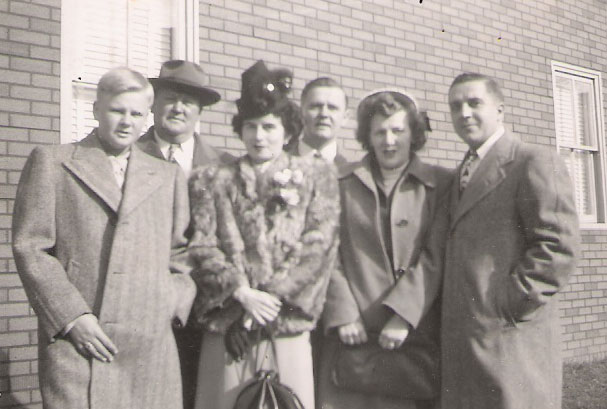 The first funeral I remember attending was 25 years ago when I was 7 years old on December 7th, 1987.

My real great-grandmother passed away in May 1941 when my grandfather was only 20. My great-grandfather remarried a few years later to Agnes Pulshinski. I’m told she wasn’t much of a fan of the “step” prefix and since she wasn’t a true blood relative, she told her kids and grandkids to call her Tanta. From a previous post, commentors on the site helped me figure out that “Tanta” usually means “Aunt” in German, but is also sometimes used the way she used it.

I knew Tanta pretty well in my 7 years. I remember her as being a petite, white-haired old woman. She was very nice and I remember her small apartment having plastic on all of her furniture. I don’t remember really being that sad when she passed away as I was not extremely close to her and since I was 7, maybe I didn’t process it. It is interesting that I remember the date of her funeral 25 years later. 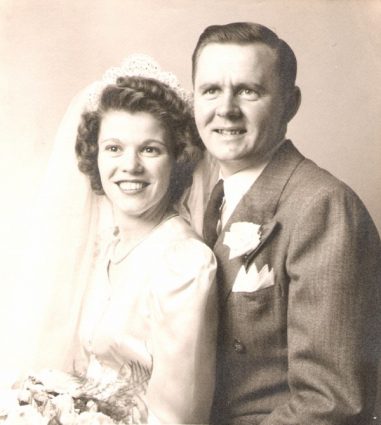 Today we lost my grandmother, Mary Jane Zalewski, one of the world’s biggest fans of Irish heritage. Born in Ashland, Wisconsin on April 27, 1926 along with her twin brother, Tommy, to Maurice & Agnes (Braatz) Corrigan. Story has it that they were born so small that my great-grandmother would bundle them up and put them on the oven door to keep them warm. While in Milwaukee visiting her aunt Ethel Corrigan, who ended up marrying my grandfather’s cousin, Edy Strelka, she met my grandfather, Richard Zalewski. They tied the knot on October 11, 1947 and had their first child, my uncle, in 1948. My dad soon followed in 1951 and then my aunt in 1960.

Throughout my life, they always lived in the little house in Cedarburg, Wisconsin that we used to visit for Christmas Eve and many other times throughout the year. My paternal grandparents were very loving, as most grandparents, but they were also stern. Grandpa would scold us for sneaking into the basement or jumping into the window wells, but Grandpa and Grandma also used to have the greatest toys to play with including the matchbox car track and the puzzles. She was always a big fan of Ireland and anything Irish. Even though she was probably just as much German (and some French) than she was Irish, no one dared to correct her on it. She was a CORRIGAN and she was full-blooded Irish and that’s that!

When I was in my first year of college, my grandfather got sick and passed away on April 18, 1999. It was very sad to me since this was the first major death in my family and the first loss of a grandparent. I didn’t know how my grandmother would handle it. It turns out she did very well with herself. She drove (albeit slowly) where she needed to go, met with friends, knitted like she always did, and was usually in good spirits. Sadly, she fell while living alone and had to move to an assisted living center, but she still made the best of it. I ended up buying my grandparent’s old house from my grandmother and we currently still live here. It’s comforting at times. Unfortunately, during the last few years, Grandma started to forget things and had trouble getting around, but she was her normal self a lot of the time. Even at 85, she still loved her pizza and beer. I’m told that she passed away peacefully in her sleep and now she is in a better place, probably catching up with my Grandpa. He’s probably got the “Let Me Call You Sweetheart” vinyl record already playing on the record player.

You can view the memorial video I made for her funeral.

We’ll miss you, Grandma. Thanks for everything. Ireland has one less fan today.

How do I live without the ones I love?
Time still turns the pages of the book it’s burned
Place in time always on my mind
And the light you left remains but it’s so hard to stay
When I have so much to say and you’re so far away

I love you, you were ready
The pain is strong and urges rise
But I’ll see you when it let’s me
Your pain is gone, your hands untied

– Avenged Sevenfold, “So Far Away” My wife lost her paternal grandmother early this morning. She wasn’t doing too well for the past few weeks, so she is now free from that pain. I’m sad that my daughter was not able to meet her great-grandmother, but great-grandma was able to see a photo of Aerissa. Plans are still up in the air, but we may be making a cross-state drive sometime in the near future for the funeral, which may be interesting with a 2-month-old baby. 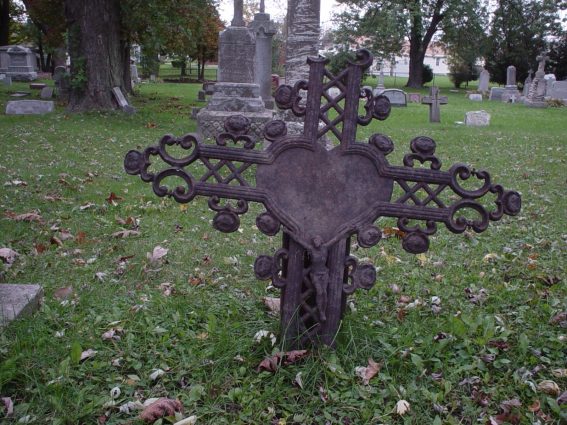 I’ve been doing some indexing for FamilySearch. Helping index old documents for other people to be able to freely search is a good thing to do. Plus, I like seeing all of the history of some of these places. Stop on over there and lend a hand.

While indexing a bunch of New Hampshire Pre-1900 death records, I came across a lot of “causes of death.” A few of them interested me since they were named quite odd. I first was confused by “Consumption” since my first thought was that someone ate themselves to death (come on, you thought it, too.) So, I visited the site where everyone goes to figure something out, Wikipedia. It turns out that consumption is actually Tuberculosis or TB. It was called consumption is the 1800s because “it seemed to consume people from within.” I thought a lot of these names were interesting and it’s also interesting to see epidemics sweep across certain areas. Also, if you’re looking through your family tree, it’s good to be able to see patterns such as Heart Disease or Stroke in your genes.

I thought that listing some of the more common causes of death and their descriptions/name changes would be helpful to some people out there.

Tuberculosis – aka TB, Comsumption, phthisis pulmonalis – a common and often deadly infectious disease caused by mycobacteria. Tuberculosis usually attacks the lungs (as pulmonary TB) but can also affect the central nervous system, the lymphatic system, the circulatory system, the genitourinary system, the gastrointestinal system, bones, joints, and even the skin. TB caused the most widespread public concern in the 19th and early 20th centuries as an endemic disease of the urban poor. In 1815, one in four deaths in England was of consumption; by 1918 one in six deaths in France were still caused by TB. In the 20th century, tuberculosis killed an estimated 100 million people. source

Diptheria – is an upper-respiratory tract illness. It is characterized by a low grade fever, a sore throat and a membrane adhering to the tonsils, pharynx and nose. This membrane can suffocate the victim. One of the deadliest outbreaks was from 1735-1740 in New England. During this time, some towns had 80% of their children under 10 die.

Myocardial infarction – commonly known as a heart attack, occurs when the blood supply to part of the heart is interrupted. Heart attacks are the leading cause of death for both men and women all over the world. Important risk factors are previous cardiovascular disease (such as angina, a previous heart attack or stroke), older age (especially men over 40 and women over 50) and tobacco smoking. source

Dysentery – is a disorder of the digestive system. Dysentery is typically the result of unsanitary water containing micro-organisms which damage the intestinal lining. source Amoebic dysentery is caused by a small parasite found in contaiminated water. Ameobic dysentery is often known as “Montezuma’s Revenge”, a reference to the legend that the Aztec king Montezuma poisoned the water of Mexico for all that were not born there as revege on the conquistadors.

Cholera – is a water-bourne disease. It is transmitted through contaminated water or through eating improperly cooked fish, especially shellfish. Cholera killed due to the fact that it severely dehydrated the victim. There were a few cholera outbreaks in the early to mid 1800s in North America.

There are also some larger ones such as Influenza, or the flu, and Smallpox that caused issues in the 1800s. You also get the common “Old Age” cause and others such as “Accident” or “Suicide.” It’s interesting to see how they lived in the 1800s and what things you always had to be worried about. That makes me think how good we do have it today.