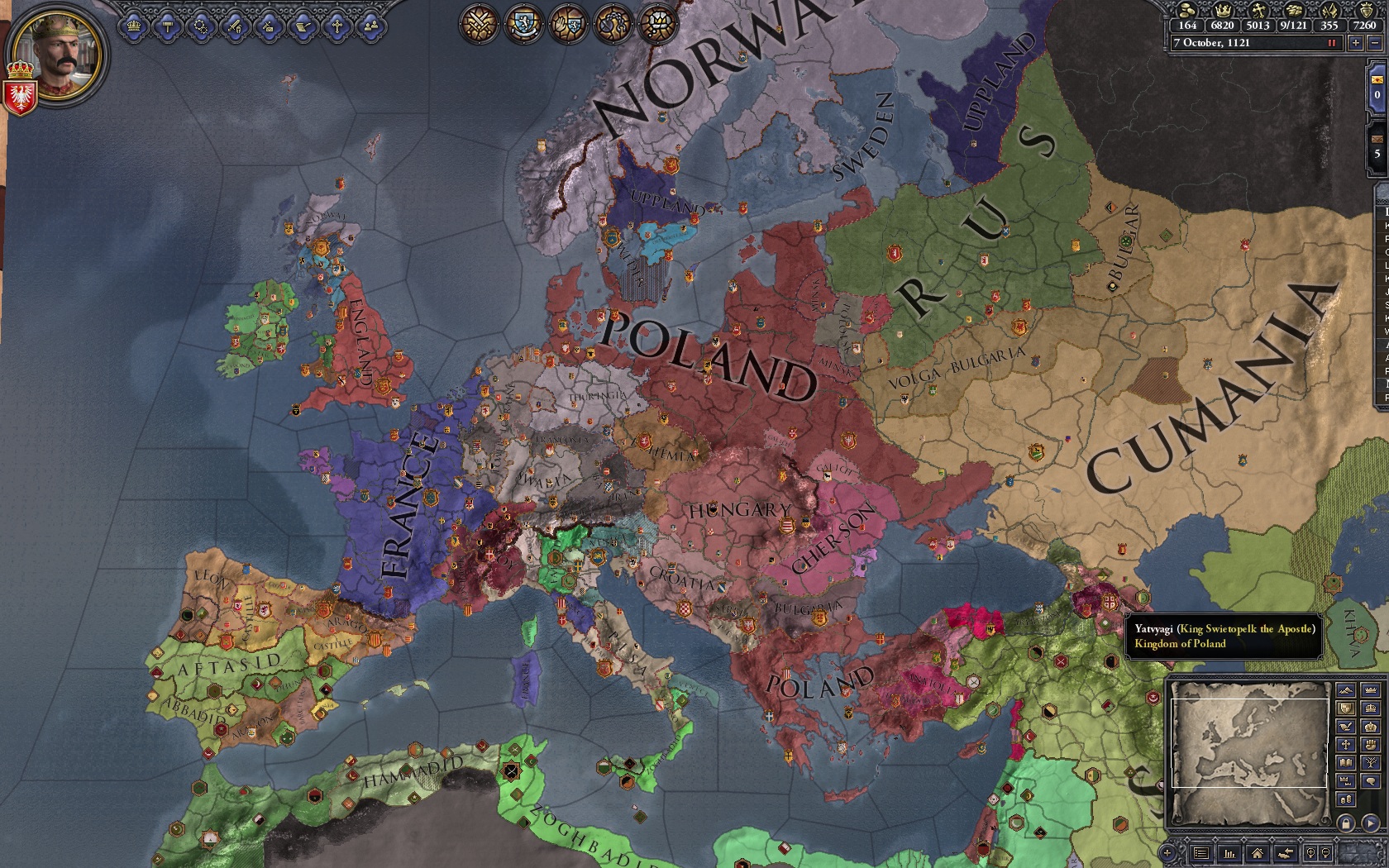 Besides genealogy, one of my other enjoyments is video games. For people who don’t really dabble much in video games, which is probably a lot of the genealogy community based on demographics, they probably think it’s just a wastes my time and rots my brain. While, in some cases, it probably does, in other cases it makes me learn about the history of the world by letting me get involved in that history.

Two games from Paradox Interactive have sucked up almost all of my free gaming time (which, with 2 kids, is not a lot.) They are Crusader Kings II and Europa Universalis IV and are described as “grand strategy” games.

The first, Crusader Kings II, which my brain is stuck to at the moment, is described: “[explore] one of the defining periods in world history in an experience crafted by the masters of Grand Strategy. Medieval Europe is brought to life in this epic title rife with rich strategic and tactical depth.” You can choose any one of hundreds of noblemen anywhere from 867 to about 1453. Start with a king and rule your minions, or start with a count and work your way up to emperor, if that’s your thing. There is really no goal to the game, it’s basically a sandbox. Each time your character dies, you begin to play as their heir. Do what you want, the only important thing is to continue your dynasty by having heirs because once you run out of bloodline heirs, your game is over (or it hits 1453.)

Europa Universalis IV is similar to CKII as it’s a grand strategy game, but instead of controlling people, in EUIV, you control a country.

The empire building game Europa Universalis IV gives you control of a nation to guide through the years in order to create a dominant global empire. Rule your nation through the centuries, with unparalleled freedom, depth and historical accuracy. True exploration, trade, warfare and diplomacy will be brought to life in this epic title rife with rich strategic and tactical depth.

Though, in EUIV you can literally pick any country in the world from 11 November 1444 A.D. (the day after the crushing defeat of the Poles and Hungarians by the Ottoman Turks at the Battle of Varna, and the death of King Władysław III of Poland), and ending 1 January 1821 A.D. I put less time into this one so far, but it has been out for less time. It’s a different style that CKII. You deal more in colonization or trade or warfare and expanding your country around the world. In CKII, you deal more with people and expanding your kingdom through marriage, intrigue, and clever relationships while at the same time watching your back. It’s like a world-wide soap opera.

Though, these games have a pretty steep learning curve, but once you get into them they are tons of fun. Once you hit the play button, you are creating an alternate history for the world. For example, here is one of my first play-throughs of Crusader Kings II that I talked about on our entertainment/gaming site.

I started as King Bolesław II of Poland and it went pretty smooth during his reign. He lived to be pretty old, even by today’s standards, dying at 82. That’s when everything fell apart. My new heir was the King’s first born son, Franciszek, though he did not inherit everything because the succession laws in Poland were “Gavelkind.” That law gives the first heir the major titles and then equally spreads the rest to the other heirs (male in this case.) So, Franciszek’s half-brother, Josef, decided to declare war on me for his claim to the Kingdom of Poland. He won, due to having many allies.

It didn’t last long as his brother, Roman, went to war with him for the kingdom also, imprisoning him in the process and taking over. More people started wars. In the end, or as it stands in my game right now, Roman is dead, Josef is a Polish Duke, their sister Elisabeth is now Queen of Poland, and I’m down to being a Count with one county, but still alive and scheming including secretly murdering two other Counts. Though Franciszek is no longer my character, his son the heir is now my character. Sadly, one of his main traits is “imbecile” so he’s a really bad ruler. He has no bloodline heir since he’s only 15, so my goal is to get him a son before he dies or gets assassinated.

And that was back when I wasn’t very good at it. You learn as you play and from your mistakes. I learn a lot of tips from “Let’s Play” YouTube videos. Every time you play, it is completely different. My most recent play through with Poland, King Bolesław died in his 30s with only a single daughter, but she reigned for a long time as Queen Helena the Ironside. After that, it sort of fell apart after the Holy Roman Empire went to war with me for his vassal, the Kingdom of Bohemia and I had to surrender most of Poland to Bohemia. Currently, I am ruling as the King of Denmark, which somehow came to my dynasty through clever marriages and deaths.

Not only is it enjoyable, but I’ve learned a lot more about the history of the world during these times. You can play from 867 with Crusader Kings II and when it ends in 1453, you can convert your game over to Europa Universalis IV and then play until 1821. That’s almost 1000 years. What kind of world will it be then? I bet your family history would be very different.