Yesterday, the big news across the Genetic Genealogy community was the release of Ancestry DNA’s Genetic Communities. According to Ancestry, these communities are built like this:

We find Genetic Communities™ by looking at a network of DNA connections we build using millions of AncestryDNA members in our database. When we build a network like this using millions of AncestryDNA members with billions of DNA relationships between them, we find groups of people in the network that have more DNA matches to each other than to people in other parts of the network. We call these groups Genetic Communities. We use a popular network analysis method called community detection to discover them.

So, it’s sort of a mix of DNA matches along with information from the millions of family trees built on the site. Together they can find a community in the more recent past. Previously, we only had ethnicity estimates to work with, but those were usually more broad and much deeper in the past. For example, here are my ethnicity results. 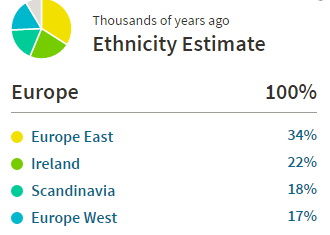 That Scandinavia one still confuses me a bit. but who knows where my deep ancestry came from. Those Scandinavians were known to travel.

I have two active Genetic Communities, as do most people it seems. My first one is Germans in Brandenburg & Mecklenburg-Vorpommern (very likely >95%) which matches up very well with my known ancestry. The other one is Poles in Pomerania, which also matches up very well though their confidence is only at 20% for this one at the moment. 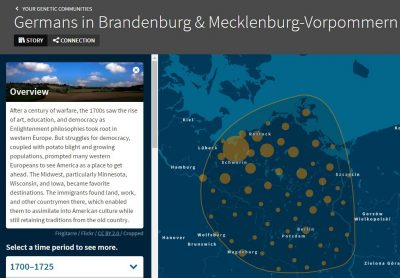 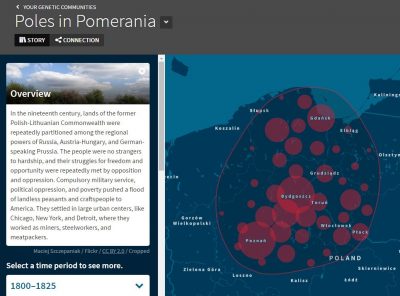 You can also break down the communities into time periods to find out more information about what happened in that area during those years. If I open up the time period when most of my ancestors migrated, it talks about that exact thing and also talk about how they came to the Wisconsin area.

So far these communities have been helpful and surprisingly specific and on the right track. Based on a lot of the messy, incorrect trees I see on the site I’d expect some skew, but I imagine those are not the majority. If you’re looking for much more insight on these communities, check out the great post over at The Genetic Genealogist. Ancestry has also put together a short video introducing the feature.