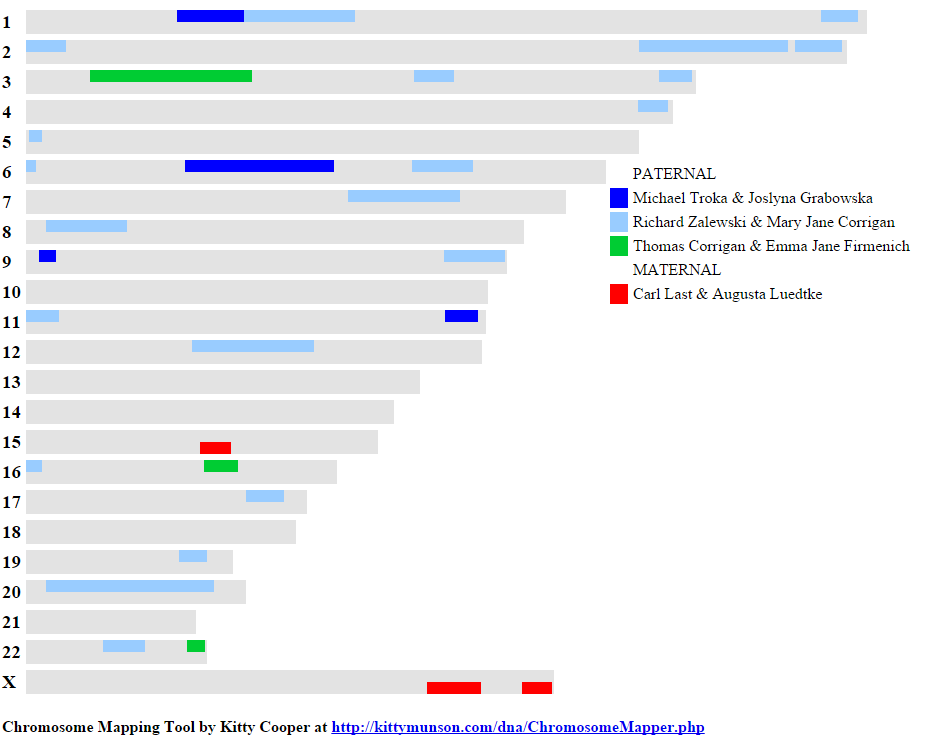 It was exiting to see another cousin listed on my 23andMe DNA Relatives list yesterday. While going through my matches, I noticed a familiar name, my paternal grandmother’s cousin (so, my first cousin, once removed.) I now have 4 confirmed cousin matches on that list (excluding my father.)

Also, earlier this week I confirmed the most recent common ancestor (MRCA) speculation on another one of my matches. I did some digging on who we thought was our common ancestor and was able to prove it (with like 95% certainty) that we share 3rd-great-grandparents. I found a lucky obituary via a Google search that confirmed her connection to the TROKA surname. Once there, it just took a little source triangulation to confirm dates and connections back up to Thomas Troka to prove he is the brother of my great-great-grandfather, Joseph Troka.

3 out of the 4 of the confirmed cousins on my list are paternal (1 first cousin; 1 third cousin, twice removed; 1 first cousin, once removed.) The connection on my maternal side is a third cousin through my paternal grandfather. I can now fill in the shared genomes of our MRCAs and see exactly which ancestors I received which chromosomes from. Obviously the goal in that is to go back as far as possible to make it as granular as possible. 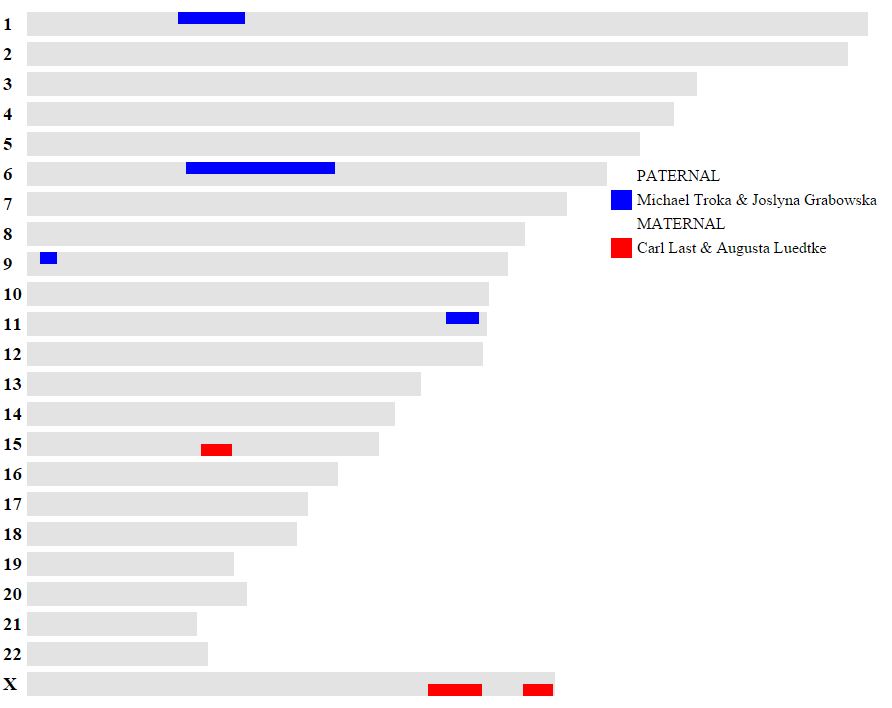 One of the first steps in my 2015 Year of the DNA project is to look at new avenues of research and get my DNA info out there to other possible cousins. In the last few days I did a few things.

I finally transferred my 23andMe DNA over to the Family Tree DNA Family Finder. You can transfer it over for free right now to see a bunch of your matches, but you can’t do much analyzing and meeting until you pay the $39 transfer price. It’s actually a good deal to get into FTDNA’s database as they have a lot of users in it already who seem more interested in genealogy than a lot of the 23andMe members. I saw a few new matches and also someone with the surname CORRIGAN, which is my paternal grandmother’s surname. We matched on a location that both my father and my paternal cousin match on, so that’s good news.

I also finally donated to GEDMatch.com. I’ve been using it for a long time and even though it’s mostly flaky when using it due to its popularity, it’s still an invaluable tool to be able to match people from multiple testing companies. With a $10 donation, you also get access to their “Tier 1” tools like Triangulation, which are pretty helpful.

And I also updated my DNA information over at WikiTree. Once you add that, it will add your information to anyone that you may share DNA with including Y-DNA, mtDNA, and Autosomal. This way when someone finds one of their ancestors, they will also see that you share DNA with this ancestor. If they’ve also taken a test (or have a GEDMatch ID) you can see the match info. It’s just another way to find more people. You can see how it looks here on my great-great-grandfather’s wiki page.

Hopefully, some of these updates will help bring more matches and cousins to my door (well, not physically to my front door, that’d be weird.)