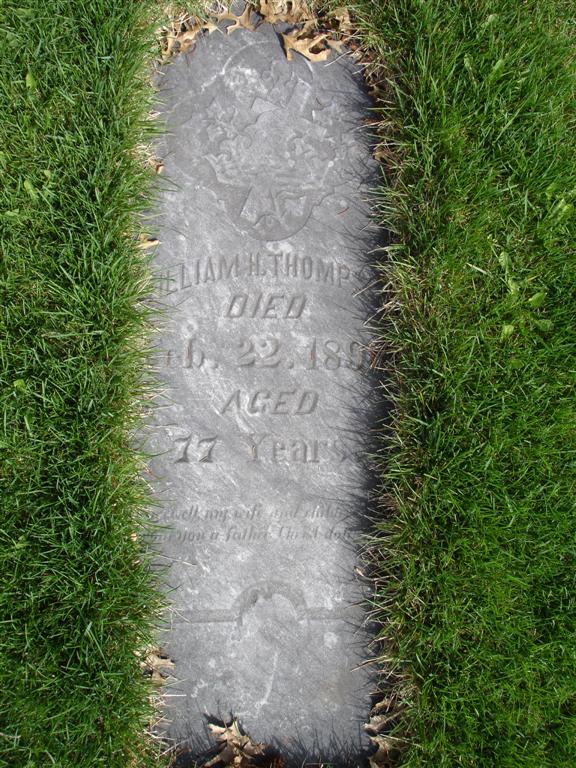 The ninth ancestor in my 52 week challenge is my 4th-great-grandfather, William Henry THOMPSON.  With a name like William Thompson, how hard can it be to pinpoint him?

This has been my trouble with William. I have records of him starting in 1850 once his family settled in Wisconsin, but before that is a mystery. If I do a search based on his information, I get thousands of results. According to the sources I do have, William was born sometime between 1810 and 1816 in either England, Ireland, or Scotland. His headstone says he was 77 years of age when he died in 1890, so I usually use 1813 as his birth year. There is a Wisconsin death record over at FamilySearch that I’m pretty sure is this William Thompson that lists his parents as William THOMPSON and Fasmie RUINNET. Though, a lot of other user’s information lists his parents as Edward & Isabella THOMPSON, but no solid sources so far.

According to my records, in 1839, he married Claude-Françoise “Francis” QUINET in Syracuse, New York. I have yet to find solid evidence of this marriage, but the Quinet family was recorded to have been in that area during that time. They must have left not long after the marriage, as their first child was born in Wisconsin in 1841. They settled in in Granville, Milwaukee Co., Wisconsin, which is now no longer around, but part of multiple towns in the area. Sometime between 1854 and 1857, they relocated north to the Morrison and Wrightstown area in Brown County, Wisconsin.

On 4 February 1890, William passed away and is buried next to his wife at St. Paul’s Cemetery in Wrightstown. I wrote a post about our trip to that area and the finding of William’s resting place.